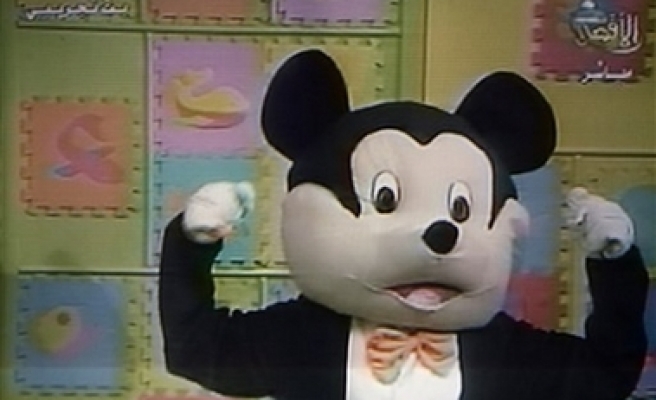 A weekly children's show on a Hamas-run TV station featuring a Mickey Mouse lookalike preaching Islamic domination was broadcast as usual Friday, two days after the Palestinian information minister said it would be suspended.

The show, featuring a giant black-and-white rodent with a high-pitched voice, made headlines worldwide because the character has preached against Israel and the U.S. and urged Palestinian children to fight Israel. It is broadcast on Hamas-affiliated Al Aqsa TV.

Hamas shares power in the Palestinian government with the Fatah movement of Palestinian President Mahmoud Abbas.

Palestinian Information Minister Mustafa Barghouti, said Wednesday that the show reflects a "mistaken approach" to the Palestinian struggle for independence and would be suspended immediately to allow for a review.

But the station's manager, Hazem al-Sharawi, said on Friday the show called "Tomorrow's Pioneers" has an educational message and will not be canceled.

Barghouti would only say Friday that the station had promised to correct any problems. He said he has no control over private stations, but has asked the station to review the content. If there are still violations, "we will continue to work with them," he added.

Israeli officials have denounced the program.

The lead character is called "farfour" or butterfly in Arabic, but is an copy of the Disney character. On Friday, the character said he cheated on his exams because "the Jews destroyed my house," and he lost his books under the rubble. Children called in telling him his behavior was un-Islamic.

On previous episodes, the character said: "You and I are laying the foundation for a world led by Islamists. We will return the Islamic community to its former greatness, and liberate Jerusalem, God willing, liberate Iraq, God willing, and liberate all the countries of the Muslims invaded by the murderers."

During Friday's show, the adult presenter and the station manager, al-Sharawi, told viewers that once Islam rules, its message of "good and peace" will also rule.

"We don't incite. We present facts," said al-Sharawi. "We can't cut off our children from the reality they live everyday."

He said he repeated the words love and peace six times during the show.

"We have an educational and entertainment message. It carries knowledge, a sense of humor and morality. There is no shame in this, and we will not go back on it," he said.