Mideast allies on US trafficking blacklist

US Middle East allies Bahrain, Kuwait, Oman and Qatar, as well as key trading partner Malaysia were added to a Washington blacklist of countries trafficking in people. 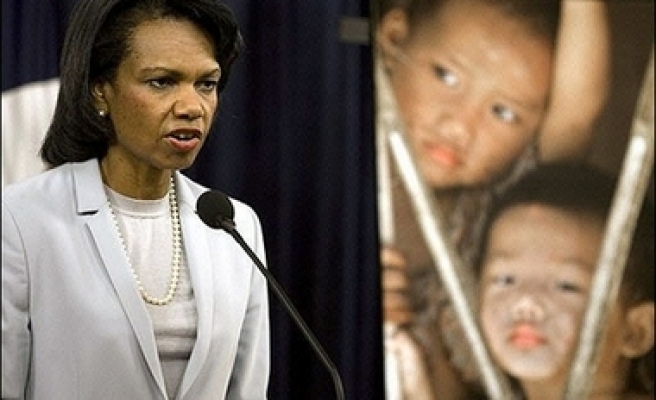 US Middle East allies Bahrain, Kuwait, Oman and Qatar, as well as key trading partner Malaysia were added to a Washington blacklist of countries trafficking in people.

Algeria and Guinea were the other additions to the blacklist of the US State Department’s annual “Trafficking in Persons Report,” which analysed efforts in about 164 countries to combat trafficking for forced labour, prostitution, military service and other purposes.

The seven countries, all of whom were on a special watch list last year, join Myanmar, Cuba, Iran, North Korea, Saudi Arabia, Sudan, Syria, Uzbekistan and Venezuela in the dreaded “Tier 3” list as the worst offenders of human trafficking.

Being on the blacklist, they could face sanctions, including the withholding by the United States of non-humanitarian, non-trade related foreign aid.

Countries that receive no such foreign assistance would be subject to withholding of funding for participation by government officials in educational and cultural exchange programs.

Launching the 236-page report, Secretary of State Condoleezza Rice cited “disturbing evidence” that prosecution of human trafficking cases had levelled off across the globe.

In countries with major human trafficking problems, “only a couple” of traffickers were brought to justice,” she said. “This cannot and must not be tolerated.”

US government research shows 800,000 people are trafficked across national borders, about 80 percent of them women and girls and up to half minors, the State Department said.

The majority of transnational victims are females trafficked into commercial sexual exploitation, it said.

The wealthy Middle East nations added to the blacklist this year were largely accused of mistreating foreign workers, which they heavily rely on.

“It is especially disappointing that so many wealthy countries in the Near East that aren’t lacking resources to make significant progress are on Tier 3, for example Saudi Arabia for the third consecutive year,” said Mark Lagon, Rice’s senior advisor on the human trafficking problem.

He said weak foreign workers’ sponsorship laws in these countries made the guests “vulnerable” to abuse in both private homes and work sites. Some victims who reported abuses were instead ”held hostage,” sometimes for years, in police centers.

Malaysia was cited for “failure to show satisfactory progress” in areas such as punishing acts of trafficking, providing adequate shelters and social services to victims and protecting migrant workers from involuntary servitude, the report said.

“The Malaysian government needs to demonstrate stronger political will to tackle ... significant forced labour and sex trafficking problems,” it said.

No india despite worst record

India, which has the world’s worst human trafficking problem and been on a watch list for the fourth consecutive year with Russia and Mexico, received a specific warning that it could be relegated further to the black list if it failed to contain the problem.

China, Armenia and South Africa were on the watchlist for the third consecutive year.

Singapore, which had been in the Tier 1 list, was relegated to Tier 2 this year. It “does not fully comply with the minimum standards for the elimination of trafficking,” the report said.

Sri Lanka was placed on the watchlist for “its failure to provide evidence of increasing efforts to address trafficking.”

Bolivia, Brazil, Indonesia, Israel, Taiwan, Peru and Jamaica made “significant efforts” to combat the trafficking problem and have been removed from the watchlist, officials said. Last Mod: 13 Haziran 2007, 16:09
Add Comment