A 5-year-old girl who was feared drowned with her grandfather on a boating trip startled searchers Friday when she emerged from the woods — naked, scratched and holding raspberries. 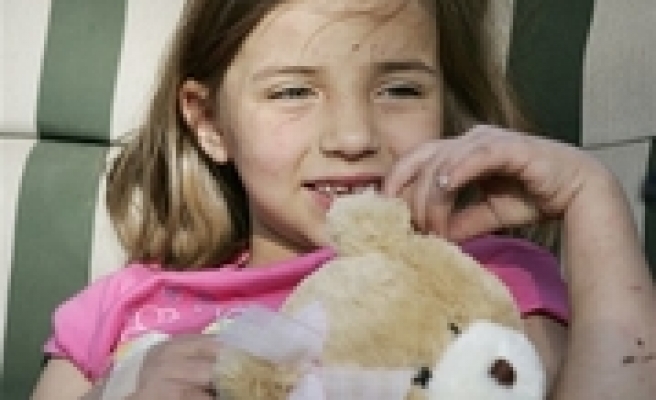 Crews had pulled her grandfather's body from the Kankakee River in eastern Illinois just hours earlier.

"People were like, 'Who's that little girl? That can't be her, can it?'" Kankakee Sheriff's Chief Deputy Ken McCabe said. "I went up to her (and) asked, 'How you doing? What's your name?'"

When authorities told Hannah Klamecki's family — already grieving the loss of her grandfather — that she was alive, the home erupted in screaming.

Hannah was taken to a hospital as a precaution. She slept with her parents and a teddy bear at her side before being released. Cradling the bear, she spoke freely of her ordeal Friday evening.

"I was scared last night when everybody was gone," she said. "I went searching all over the world to look for the cottage (where her grandparents live)."

Hannah had scratches on her face and body and thick dirt under her nails. She had poison ivy rashes on her legs and couldn't walk because splinters and thorns cut her feet.

Hannah and her grandfather, David Klamecki, 62, were last seen Wednesday evening on the river near Momence, about 45 miles south of Chicago.

Authorities believe the river current swept the girl away from a small island where she and her grandfather had stopped to swim and to the shore of the mainland where she eventually was found.

She told searchers she was wearing floats on her arms and pulled herself from the water with a branch.

"That's a tough little girl, I tell you," McCabe said.

Hannah said she had taken off her bathing suit because it was muddy and itchy, friends of the family said.

On Friday morning, searchers found her grandfather's body near the island, which is close to a part of the river locals call "Whirlpool Bend" because of strong currents from the union of the river and two tributaries.

The surrounding area is wilderness with no homes, and populated only by coyotes and deer, Momence Fire Chief Dave Horn said.

Richard Wehrle, a friend and neighbor of David Klamecki, said the area is notoriously treacherous.

"Anybody who knows that river knows that that's the deadliest part of the river," Wehrle said.

The girl's footprints were still visible on the island beach. Searchers believed she had drowned and were scouring the area with a team of divers, sonar equipment and a helicopter.

Hannah appeared just before 10:30 a.m., in an area about three-quarters of a mile from where she's believed to have reached the shore, McCabe said.

The girl was reunited with her parents, who were waiting with family and friends at the grandparents' home.

Hannah calmly sat in a rescue vehicle when her parents saw her for the first time, her father said.

"She didn't say much," Mike Klamecki said. "She was eating her banana looking at us. We were jumping around like maniacs."

Tricia Little, a close family friend of Hannah's parents, said David Klamecki taught the girl and her two younger sisters about the outdoors. She credits that instruction — and God — with Hannah's survival.

"Obviously, we're giving all the glory to God on this one," Brian Little said.