An Egyptian court has upheld a decision by Hosni Mubarak, the president, to have 40 members of the opposition Muslim Brotherhood group tried by a military court. 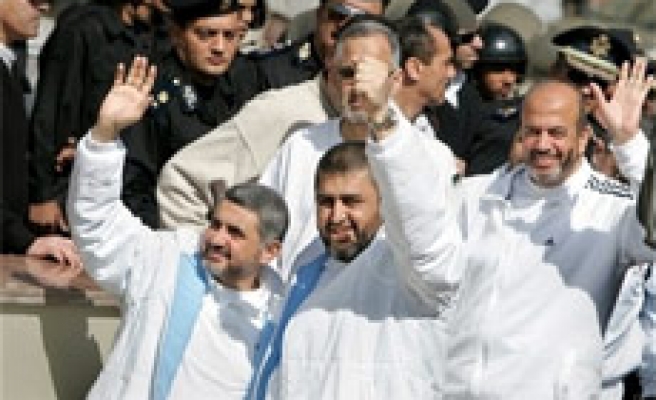 An Egyptian court has upheld a decision by Hosni Mubarak, the president, to have 40 members of the opposition Muslim Brotherhood group tried by a military court.

Essam Abdel Aziz, a supreme administrative court judge, reversed a ruling in a lower court passed on May 8 that had declared the president's decision invalid.

The court ruling clears the way for the resumption of the military trial of the detainees, some of whom have been in police custody since December.

Brotherhood lawyers said the judges examining the case were all working for the government as paid consultants and could not be impartial.

Abdel Moniem Abdel Maqsoud, a Brotherhood lawyer, said: "All these [judges] are assigned ... to the ministries and the presidency. So of course there's an objection to this body hearing a case ... where the opponent is the president."

The ruling last month in the lower court had said that the referral of the detainees to military courts in February had been illegal, and the defendants should be tried in civilian courts.

That ruling required the authorities to free the detainees, but the government often ignores court release orders in cases involving opponents, and they have remained in detention.

Mubarak referred the 40 members of the Brotherhood, including Khairat el-Shatir, third-in-command of the group, to a military court on terrorism and money-laundering charges in February, the first such referrals since 2001.

The government has stepped up a crackdown on the Brotherhood since the group's strong showing in elections in 2005 gave it about a fifth of the seats in parliament.

It has targeted Brotherhood finances and detained or arrested hundreds.

Parliament lifted the immunity of two members of the Brotherhood last Wednesday as a prerequisite for sending them to trial.

A set of constitutional amendments approved in a referendum in March gave Mubarak broad powers to transfer anyone suspected of "terrorism" to military courts, known for tough and swift verdicts.

But the order transferring the detainees to the military courts was made before the constitution was changed. Last Mod: 15 Mayıs 2007, 11:34
Add Comment