Monks rally for a Buddhist Thailand

Hundreds of Buddhist monks have rallied in the Thai capital calling for Buddhism to be enshrined in the constitution as Thailand's national religion. 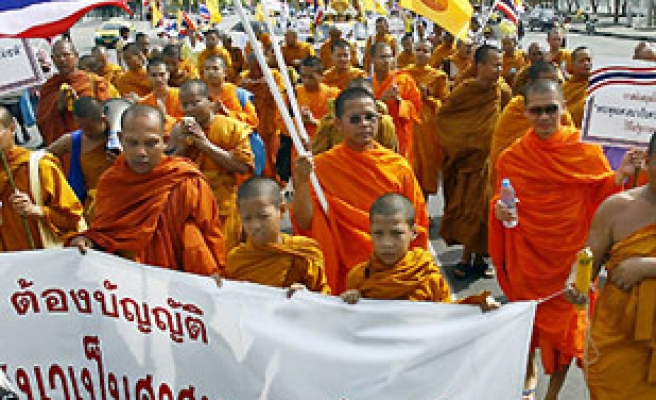 The protest outside parliament in Bangkok comes as the country's military appointed government plans to unveil a new national constitution this month.

The monks' call revives a debate that dates back to 1997 when a campaign to make Buddhism the national religion was dropped amid concerns that it would divide the country.

The proposal has split Thais, with some worried that it could inflame tensions in the Muslim south of the country, where three years of violence have left more than 2,000 people dead.

Previous Thai constitutions have never declared a state religion, although about 90 per cent of Thais consider themselves Buddhists.

Supporters of the move want to see an existing clause in the constitution which states that the king must be a Buddhist and upholder of all religions, to include an addition making Buddhism the national religion.

The government installed by a military coup last September has said the new constitution will help guide the kingdom back to democracy.

It says a draft of the charter, due to be released on April 26, will be put to a national referendum in September before elections expected in December.

However, critics have said they fear the new constitution will be used as a tool by coup leaders to cement the power of the military, long a powerful force in Thai politics.