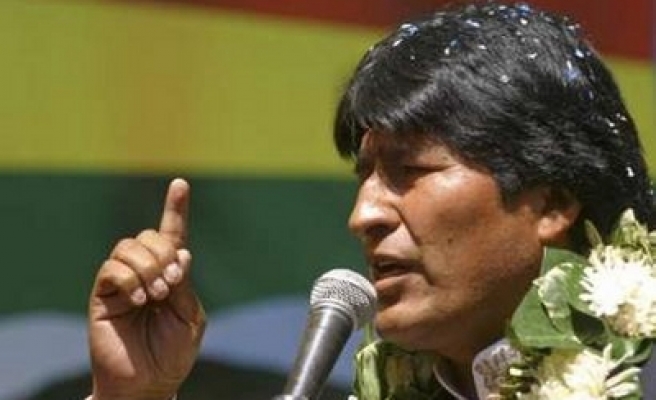 Morales said his government would take absolute control from this moment on" of the former state telephone company, in which Telecom Italia SpA owns a 50 percent share.

Morales announced plans to buy back Entel last year, but negotiations with Telecom Italia have dragged out. Following Thursday's decree, Bolivian police were dispatched to stand guard outside Entel offices in La Paz and the eastern city of Santa Cruz.

"Basic services — call them energy, water or communications — cannot be in the hands of private business. They're public services," Morales told a crowd outside his presidential palace during celebrations of international workers' day.

Public Works Minister Oscar Coca said that the Bolivian government would later name the price it intended to pay for Telecom Italia for their shares, and that the transfer would take place within 60 days.

Morales also announced the return to state control of four former pieces of Bolivia's state energy company YPFB, which was privatized during the 1990s. He had announced plans for that move when he declared the nationalization of Bolivia's oil and gas sector on May Day 2006.

The president said he has signed an agreement to purchase a majority share in the gas production company Andina from Spanish company Repsol YPF. Terms of the sale were not immediately released.

Morales commended Repsol as the "symbol of a business that negotiates" — while announcing the nationalization of three other foreign-owned energy companies that failed to work out a deal before his April 30 deadline.

The government will purchase majority shares in the gas production company Chaco, controlled by British Petroleum, and the pipeline company Transredes, controlled by the Houston-based Ashmore Energy International. But it will buy all of the German-Peruvian owned distribution company CLBH, Villegas said.

Prices for each of the companies' shares have not been set.

Bolivia privatized the struggling Entel in 1995, handing 50 percent of the company to Stet International in exchange for the Italian company's promise to invest $608 million to modernize its services. Stet later merged with Telecom Italia.

Telecom Italia says it has spent more than that to build Bolivia's largest cell phone and Internet networks while maintaining a commanding share of the now-deregulated telecommunications sector.

But the Bolivian government says Telecom Italia fell short on the promised investment and owes some $25 million in taxes.