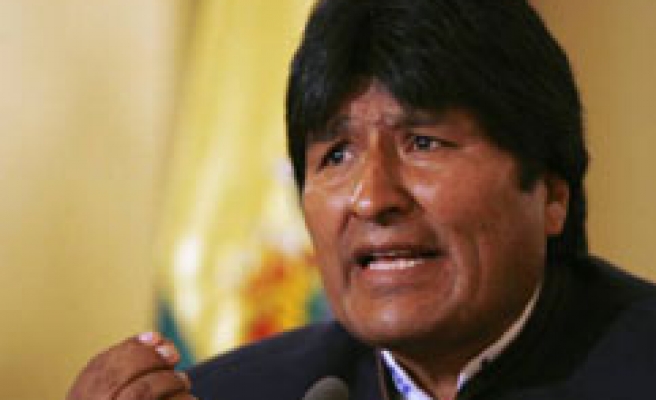 The ballot was the first of four referendums on greater autonomy from central government being planned by eastern provinces, raising tensions between Morales' supporters and the conservative opposition that is concentrated in the east.

According to pollster Focaliza, cited by local television, Santa Cruz residents voted 86 percent for the autonomy proposal and 14 percent against. The result had been widely expected because backers of Morales, a former coca farmer and close ally of Venezuela's Hugo Chavez, vowed to boycott the referendum.

No figures were published on the abstention rate, but a low turnout could weaken the referendum's legitimacy.

On the streets of Santa Cruz city, residents honked car horns as they celebrated victory.

"Today a new Bolivia is born," Santa Cruz governor Ruben Costas told thousands of supporters in the city's main square where people danced soon after the exit polls were broadcast.

Official figures were due to be published on Monday.

Voting was mainly calm, but officials said at least 18 people were hurt as supporters and opponents of Morales fought with sticks and stones in Santa Cruz city. One man died after police fired tear gas, a Reuters witness said.

Morales branded the ballot illegal and said more than 50 percent of Santa Cruz voters had either boycotted the vote or voted "no". However, he called for talks on the issue with the nation's nine provincial governors.

"I hope the governors can hear me and that together we can guarantee the autonomy of the regions," he said in a televised speech after polls closed.

Despite Morales' rejection of the validity of the ballot, the vote could increase pressure him to negotiate with his opponents in Santa Cruz and three other pro-autonomy regions in Bolivia's eastern lowlands.

The Amazon provinces of Beni and Pando and natural gas-rich Tarija are preparing to hold similar referendums in the coming months.

Growing demands for regional autonomy have exposed a bitter divide between Bolivia's wealthier lowlands and the poor Andean highlands, where tens of thousands of people marched in several cities on Sunday to show support for Morales -- Bolivia's first Indian president.

Bolivia is South America's poorest country, but its eastern areas are home to the region's second-largest natural gas reserves after Venezuela and it is a key supplier of the fuel to Brazil and Argentina.

As well as energy riches, Santa Cruz has fertile farmland and its population has grown fast over the past 40 years, with Bolivians from the highlands seeking a better life due to its growing economy.

Bolivia's highlands are more heavily indigenous, while areas like Santa Cruz have a larger European-descended population.

The vast region covers roughly a third of Bolivia's territory and is home to a quarter of the country's roughly 9 million people.

Morales has described the Santa Cruz referendum as a bid to destabilize his government, engineered by conservative rivals who oppose his efforts to break up large land holdings and reform the constitution to empower the poor, indigenous majority.

The constitutional rewrite was one of Morales' key election pledges along with the energy industry nationalization he declared soon after taking office in 2006.