About 1,267 Catholic schools have closed since 2000 and enrollment nationwide has dropped by 382,125 students according to the National Catholic Education Association. 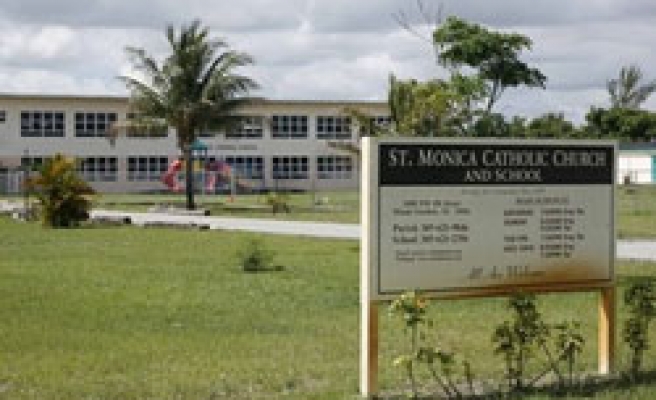 For 46 years, crime, recessions and hurricanes proved no threat to the daily ritual of St. Monica School, where the entire blue-and-white uniformed student body gathered outside each morning to join in prayer.

Come June, though, the tradition will fade away, and "amen" will close St. Monica's morning recitations for the last time. The school, a home-away-from-home for mostly minority students, will close.

As Pope Benedict XVI next week makes his first trip to the U.S. as pontiff, Catholic schools across the country, long a force in educating the underprivileged regardless of their faith, face the same fate as St. Monica.

About 1,267 Catholic schools have closed since 2000 and enrollment nationwide has dropped by 382,125 students, or 14 percent, according to the National Catholic Education Association. The problem is most apparent in inner cities, in schools like St. Monica with large concentrations of minorities whose parents often struggle to pay tuition rather than send them to failing public schools.

"We lose the kids. They can't afford it. And then as the school gets smaller, you have to raise the tuition to pay the costs and it's a vicious cycle," said Sister Dale McDonald, the association's director of public policy and education research.

The pope will gather with Catholic educators during his visit, but not those who run elementary schools — the meeting is with college presidents.

St. Monica has been operating on a deficit for about a decade. Enrollment went from 368 students in 2004 to 196 today. Requests for financial aid increased. The Archdiocese of Miami devoted more than $2.7 million in subsidies over the past seven years to keep it open.

"There's not the numbers there to keep going," said Kristen Hughes, superintendent of schools for the archdiocese. "The economy really has had a huge impact."

The recent economic downturn is being blamed for some of them, but McDonald said dioceses' huge payouts to settle sex abuse lawsuits could have played a role too.

"We have no direct correlation," she said, "but as the dioceses have gone into financial debt the funds to subsidize these schools would be diminished."

High school enrollment has remained roughly the same and schools are opening in suburbs, particularly in the West and Southwest. The Northeast and Midwest have been hit hardest.

Some dioceses have turned to public-private partnerships to keep schools open, and others have created consortiums of schools to share resources. In the Archdiocese of Washington, officials plan to convert seven schools into publicly funded charter schools this fall.

Taking taxpayer money means sacrificing the core element of Catholic schools: their faith. The schools won't be able to have prayers, and will have to strip religion from the curriculum. That has prompted petitions from parents who want the schools to stay as they are.

"What is lost is the teachings of the Catholic faith," said Joe McKenzie, a 41-year-old technology consultant who has two children at St. Gabriel School in Washington. "That voice will be silent."

McDonald said she is concerned, too. Catholic schools were once considered vital to passing on the faith to the next generation and to exposing multitudes of non-Catholics to the church. With declining enrollment, the church will need to find new means.

Perhaps most distressing to McDonald and others is the loss of schools in the inner city.

"The church has always had a strong sense of mission, particularly to the poor," she said. "As it becomes more and more difficult, not only on the poor but on middle-income people, we're not really fulfilling the mission of the church to serve all if we only can afford to serve the people who can afford the big bucks."

The issue has caught the attention of President Bush, who called faith-based schools "lifelines of learning" in his State of the Union address and said they were disappearing at an alarming rate. The White House will host a summit on the topic later this month.

Advocates for Catholic schools say it's in the public's interest to preserve them. McDonald said Catholic school students save the government $19.8 billion annually.

"They've left these urban inner-city schools when they close and they have to go somewhere," said Virginia Gentles, who oversees the nonpublic education office of the U.S. Department of Education. "It could be tough for the districts financially and from other standpoints to absorb those children."

For now, parents still line up in cars outside St. Monica each afternoon to pick their children up. Many say how sad they are to see it close.