More evidence shows Mars once wet all over / PHOTO

Minerals in the soil of Mars show it was covered once by lakes, rivers and other bodies of water that could have supported life, U.S. researchers reported on Wednesday. 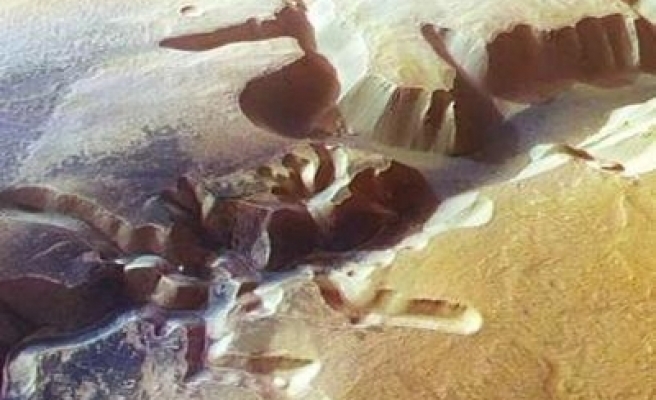 Last month the Mars Phoenix Lander found ice on the surface of the planet, but it is frozen hard and covered by red dust. Writing in the journal Nature, a team of scientists shows that the ice is left over from warmer, wetter times.

"This is really exciting because we're finding dozens of sites where future missions can land to understand if Mars was ever habitable and if so, to look for signs of past life," said John Mustard of Brown University in Providence, Rhode Island, who worked on the study.

His team used the Compact Reconnaissance Imaging Spectrometer for Mars (CRISM) and other instruments on board NASA's Mars Reconnaissance Orbiter to look at colors in reflected sunlight. This helps determine what minerals are there.

"Water must have been creating minerals at depth to get the signatures we see," Mustard said in a statement.

The clay minerals would have to have been formed at low temperatures, the researchers said.

"What does this mean for habitability? It's very strong," Mustard said. "It wasn't this hot, boiling cauldron. It was a benign, water-rich environment for a long period of time."

The findings fit with the analysis from the Phoenix Mars Lander mission, which, besides ice, found alkaline soil that could have supported life.

"The big surprise from these new results is how pervasive and long-lasting Mars' water was, and how diverse the wet environments were," said Scott Murchie, CRISM's principal investigator at the Johns Hopkins University Applied Physics Laboratory in Laurel, Maryland.

The clay-like minerals, called phyllosilicates, suggest water interacted with rocks dating back to what is called the Noachian period on Mars, about 4.6 billion to 3.8 billion years ago.

"In most locations the rocks are lightly altered by liquid water, but in a few locations they have been so altered that a great deal of water must have flushed though the rocks and soil," Mustard said.

Another study, published in Nature Geosciences, found that the wet conditions persisted for a long time. It found evidence of river channels forming a delta where the river emptied into a crater lake.

"The distribution of clays inside the ancient lakebed shows that standing water must have persisted for thousands of years," said Brown University's Bethany Ehlmann.

"Clays are wonderful at trapping and preserving organic matter, so if life ever existed in this region, there's a chance of its chemistry being preserved in the delta."