The Philippines held local and congressional elections Monday as millions cast their ballots despite months of campaign violence that left nearly 120 people dead. 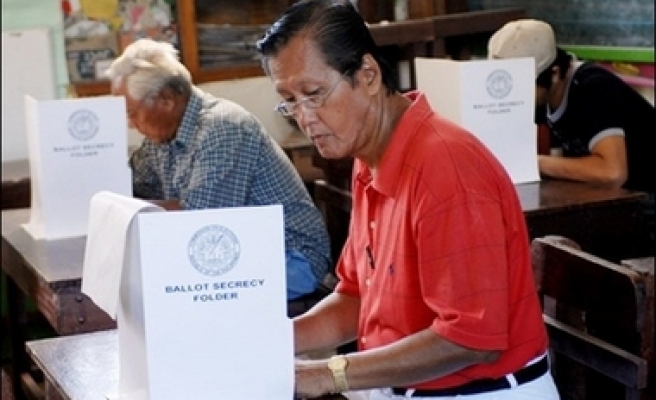 The Philippines held local and congressional elections Monday as millions cast their ballots despite months of campaign violence that left nearly 120 people dead.

But the vote was expected to have little practical effect on the reign of unpopular President Gloria Arroyo, who has fought off two impeachment bids since being accused of cheating in her re-election three years ago.

Voters were choosing the 275-seat House of Representatives, half the 24-seat Senate and 17,000 local posts -- all fiercely contested in a nation where poverty and corruption make political office a dependable source of income.

Nearly 120 people were killed in the run-up to Monday's election, including six ambushed on their way to vote. Polling stations were attacked in at least two places, and police said some ballot papers had also been stolen.

Election commission chief Benjamin Abalos said most areas reported a turnout of between 70 and 80 percent, and said violence was confined to "just a few areas" of the country.

Police had warned that communist guerrillas -- who have waged a campaign against the government for nearly four decades -- were planning a major offensive to disrupt the poll.

Arroyo, herself the daughter of a former president, refused to speak to reporters but shook hands with other voters and kissed several babies as she waited to cast her ballot in Lubao, north of the capital Manila.

Votes are counted manually in this country of more than 7,100 islands, and the results may not be announced for weeks.

The election has come under intense foreign scrutiny amid a wave of murders of hundreds of supporters of fringe leftist parties since Arroyo came to power in 2001, some of which the military says are fronts for the communist rebels.

The United Nations earlier this year said the military was in a "state of denial" about its own role in the killings and urged Arroyo to take action.

As in previous elections, the three-month campaign season was marred by violence.

"There is a breakdown of law and order here," the outgoing governor of Abra province, Vicente Valera, told AFP. The congressman from Abra, a Valera rival, was assassinated in Manila in December.

Monday's violence was sporadic but led officials to call off the voting in some areas.

In one of the worst incidents, gunmen opened fire on a polling station on the southern island of Basilan, killing a local politician's nephew and wounding three others.

Some remote precincts on the troubled island of Mindanao, scene of a decades-old Muslim separatist rebellion, were unable to open after gunmen seized election material and scared inspectors away from manning their posts. Last Mod: 14 Mayıs 2007, 12:45
Add Comment