The changes represent a fundamental shift in how Muslim youth identify themselves. But it comes with a price. 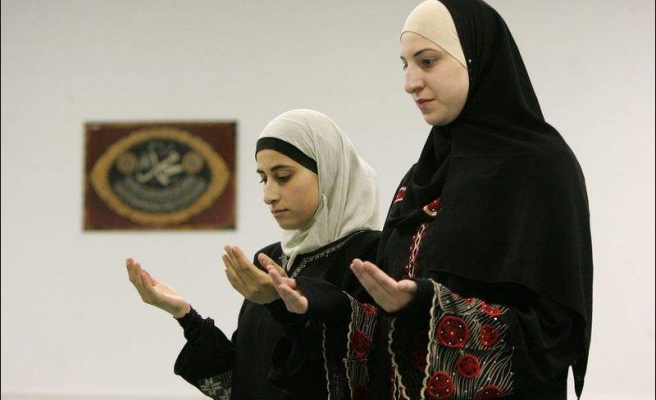 At 19, Sandra Jawad decided she wanted to wear an Islamic head scarf. Her mother's response: a long lecture on how that could draw prejudice and limit her career options.

"She told me, it's going to be hard. ... It'll make things difficult," Jawad said, recalling a four-hour talk with her mom in their Dearborn home last July.

Jawad eventually convinced her family to let her wear the head scarf. And six months later, her 44-year-old mother began wearing one, too, spurred by her daughter's religious awakening.

The two are part of the growing number of Muslim women in Michigan choosing to wear the head scarves, known as hijab, with many donning them at increasingly younger ages.

The upswing is driven by increased attendance at local mosques and Islamic schools, where clerics often describe hijab as the flag of Islam.

And the local trend mirrors an increased use of hijab among women in the Middle East and Europe, where Islamic beliefs in Muslim communities have intensified. In the past, women often waited until reaching their teenage years or middle age before putting on hijab, but now, even elementary school-age children are wearing them.

The changes represent a fundamental shift in how Muslim youth identify themselves.

But it comes with a price.

Some "look at us, smirk, stick out their tongues or shout out the window, 'Why do you have that on?' " said Arrwa Mogalli, 29, of Dearborn, who has worn hijab since she was 11. "You have nuns totally covered ... and no one questions it. But when a Muslim does it, we're from outer space."

Flip through Fordson High School yearbooks and you'll see a marked change. In 1990, only seven seniors at the Dearborn school wore hijab in their class photos. That's less than 5% of the female students in the senior class of a public school with a student body that's at least 85% of Arab descent.

While some women stopped wearing head scarves in the aftermath of the Sept. 11, 2001, attacks, there has been a noticeable increase overall in recent years. In some cases, such as in the Jawad family, children are convincing their mothers to put on head scarves, a role reversal in which kids are guiding their parents toward an Islamic life.

"She was very, very anxious about wearing it," Jawad said of her mom's decision. "But after she saw me, she found the courage to take the step."

The idea of hijab -- an Arabic word that also refers to clothing in general that conceals the body -- is rooted in the Middle East. By covering up in the presence of men who aren't their relatives, women can deflect the desires and gazes of the opposite sex, clerics say.

"Physical beauty is not what makes a woman," Mogalli said. "It's her mind and actions."

For Muslim children growing up in the United States, that belief has run into American culture, producing a generation of young Muslims trying to blend teenage Western traditions with Islamic norms.

The usual outfit for women's volleyball teams is sleeveless shirts and snug shorts, but last year's captain of the volleyball team at Fordson wore long pants and hijab while playing on the courts.

Also last year, public pools in Washtenaw County began allowing Muslim women to cover their entire bodies while swimming. The policy change came after Jumanah Saadeh of Ann Arbor, then 13, was kicked out of a pool for swimming with long pants, a full-sleeve shirt, and her Islamic head scarf.

A generation ago, hijabis, or those who wear hijab, were a distinct minority among Muslims in metro Detroit. But a national survey found that 43% of Muslim women in the United States usually wear hijab or head coverings in public, with an additional 8% wearing them sometimes. The poll of 1,050 Muslim Americans was done by the Pew Research Center from January to April and had a margin of error of plus or minus 5 percentage points.

Take the Beydoun family. Born in Lebanon, Sonia Beydoun was 2 when her family immigrated to the United States in 1977. In the 1970s and '80s, few Muslims wore head scarves in Dearborn, she said.

"I was part of the generation that lost the language, the religion," said Beydoun, now 32. "We didn't want to stand apart."

But today, "this generation is a lot smarter about the religion."

"You don't listen to God"

"That was the final thing I needed to convince me," Beydoun said. "It was something I had thought about for a long time, but I never had the courage to put it on. That was what did it for me -- my 5-year-old questioned my beliefs."

Her daughter, Mona, now 10, started wearing hijab a month before her ninth birthday.

"Putting it on was the right thing to do," Mona Beydoun said. "I just think ... if you're Muslim you should put it on."

The increase in hijab use comes as local mosques are offering more programs aimed at youth. There are lectures and gatherings aimed at American-raised Muslims every weekend.

Jawad, the 19-year-old from Dearborn, made her decision to wear hijab after attending a youth retreat with the Islamic Center of America in Dearborn.

After girls start wearing head scarves, some families throw hijab or scarf parties in their homes, celebrating their decision with cakes and head scarves as gifts. And at some mosques, such as the Islamic House of Wisdom in Dearborn Heights, there are special events to commemorate when a girl becomes a hijabi.

The mixing of cultures extends to how women in metro Detroit choose to define hijab. There are variations on how it's practiced, each woman factoring in her ideas on fashion, religion and politics in deciding what to wear. Some will wear head scarves with tight jeans.

But that trend draws critics who say it defeats the purpose of hijab: preserving modesty.

Others, like Jawad, wear head scarves with loose pants and knee-length shirts. And some, like Roleen Nawwas, 22, of Dearborn Heights, prefer to wear an abaya, a long gown also known as a jilbab.

Niqabs -- face veils that reveal only a narrow slit around the eyes -- are being used more in metro Detroit, especially in the south end of Dearborn, which is predominantly of Yemeni descent and influenced by a more conservative Islam.

But regardless of style, the underlying concept is the same.