More US Segregation Barriers in Baghdad

Despite an outcry from infuriated Iraqis and opposition from lawmakers, the US occupation army insisted Sunday, April 22, on going full speed with erecting more concrete and cement segregation barriers across the capital Baghdad. 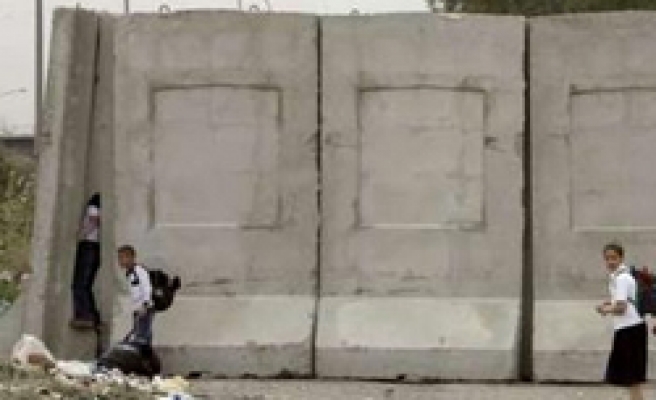 "The intent is not to divide the city along sectarian lines," Brigadier-General John Campbell, deputy commander of US forces in Baghdad, said in a statement cited by Reuters.

Campbell said new "barrier walls will outline selected neighborhoods around Baghdad in an attempt to help protect the Iraqi population from terrorists."

The main targets of the plan are the mainly Sunni districts of Adhamiya, Amiriya, Khadra and the mixed neighborhoods of east and west Rashid, he added.

"We've selected communities that have seen an increase in violence, a heightened violence, and we're protecting some of those communities with walls."

Nearly two months after the new security crackdown in Baghdad was proven a failure with bombs and explosions rocking the capital every day, the US unveiled the "gated communities" plan.

Since April 10, American US forces have been constructing a five-kilometer wall made of six-ton concrete sections along the highway dividing Adhamiyah from its Shiite neighbors.

Famed British reporter Robert revealed the US plan on April 11, asserting that the controversial gating tactic had proved its failure in Vietnam, Algeria and the Palestinian territories.

He said the plan, the brainchild of General US commander in Iraq David Petraeus, will include sealing off 30 of Baghdad's 89 districts with barricades, allowing only Iraqis with newly issued ID cards to enter.

US commanders argue that the tactic is the only way to provide long-lacked security.

"We are not sealing off neighborhoods, we are controlling access to them," said military spokesman Lieutenant-Colonel Scott Bleichwehl.

"It's a tactic, it's not a change in strategy to divide Baghdad along sectarian lines."

But unconvinced Baghdadis insist such "isolating walls" would only turn their neighborhoods into mimics of the Palestinian territories under the Israeli occupation.

"It will be like Palestine," 45-year-old Um Othman told Reuters.

Iraqis complained they had not been consulted before construction of such concrete barriers, accusing the US of widening the sectarian divide.

"It will affect national reconciliation," said Ziad Tariq, a 38-yar-old a coach at an athletic club.

"It's an obvious sign that the policy of US and our government has failed to keep security," Othman said.

The controversial American plan was rejected Sunday by Iraqi lawmakers.

"Erecting a wall around Adhamiyah is the height of failure and a bad, faulty step that violates human rights," said Mahmud Othman, lawmaker from Iraq's Kurdish alliance.

Othman called for leaders from all the Sunni, Shiite and other religious and political blocs to reach an agreement to end the country's bloodshed rather than resort to such steps.

Almost four years after the US invasion, Iraq is gripped by violence with more than a hundred people being killed every day.

Nassar al-Rubaie, head of the political bloc loyal to Shiite leader Moqtada al-Sadr, accused the US forces of creating Iraq's own Berlin Wall.

"Our security problem is not a result of sectarian tension among Iraqis, but a consequence of foreign influence," he insisted.

The six ministers of the Sadr bloc withdrew from the government earlier this month protesting refusal by prime Minister Nour el-Maliki to set a timetable for the withdrawal of US-led foreign troops.

"If they are aiming at securing neighborhoods this way, then we might see more such walls in other areas too."
Last Mod: 23 Nisan 2007, 12:50
Add Comment