Opinion polls showed most people believed Malaysian opposition leader Anwar Ibrahim did not commit sodomy against a young aide after a similar charge landed him in jail for six years before it was overturned. 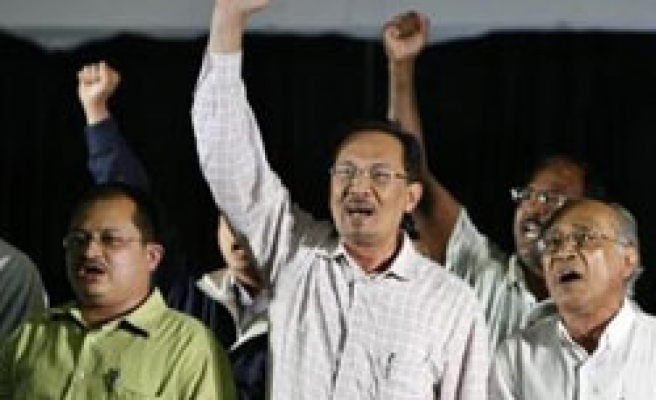 A small survey by the independent Merdeka Center research firm found just 6 percent of respondents believed the allegations, and nearly 60 percent viewed it as politically motivated.

"It's going to be an uphill battle for the government because you are facing a more cynical public," said the firm's pollster, Ibrahim Suffian.The survey polled 225 ethnic Malays aged 20 and above.

A separate survey by the independent news website, Malaysiakini (www.malaysiakini.com), showed that 94.4 percent of its respondents believed the allegation was part of a political conspiracy against Anwar.

More than 7,000 people turned up at an impromptu rally late on Tuesday night in the biggest show of support for Anwar since the aide complained to the police at the weekend about an alleged assault at a luxury Kuala Lumpur apartment last Thursday.

Police have classified the sexual assault report against Anwar as sodomy, federal police deputy chief Ismail Omar was quoted as saying by the New Straits Times on Wednesday.

So far, the police have not questioned Anwar, who has dismissed the allegation as a top-level political conspiracy to keep him from standing for parliament, and to stymie his campaign aimed at wooing defectors from the ruling National Front coalition.

Winning a seat in parliament would be the first step on the road to Anwar's wider ambition of leading the opposition to power for the first time in Malaysian history.

The sodomy case emerged at a time when Abdullah's UMNO party has been riven by dissent and the loose opposition alliance was making a bid to take power. The three-party alliance made historic gains in a March 8 general election, winning five of 13 state governments and coming within 30 seats of taking control of the 222-member parliament.

Police are investigating the former deputy premier for allegedly sodomising a 23-year-old aide, the same charge that landed him in jail for six years before the Federal Court overturned that conviction in 2004.

Sodomy is a crime punishable by up to 20 years in prison in Malaysia.

Anwar has said he planned to file a legal deposition soon demonstrating that his accuser, Saiful Bukhari, had close ties with Deputy Prime Minister Najib Razak and his staff.

At the rally, Anwar said he would not sit quietly and allow a repeat of what happened to him 10 years ago. The crowd, who had gathered at the indoor stadium in Shah Alam just outside the capital two hours before he turned up late at night, chanted "Reformasi", the battle cry of his reform movement.

A leader of his People's Justice Party told the mainly Malay crowd that the "sound of war drums" had begun reverberating from the opposition alliance.

"We will fight. When we take over the country, the first thing we will do is to bring down the price of fuel," Anwar said.