‘Throughout my whole life I was seen by all to be of my kingdom the most trustworthy guardian, and one who considered holiness to be an inimitable joy. 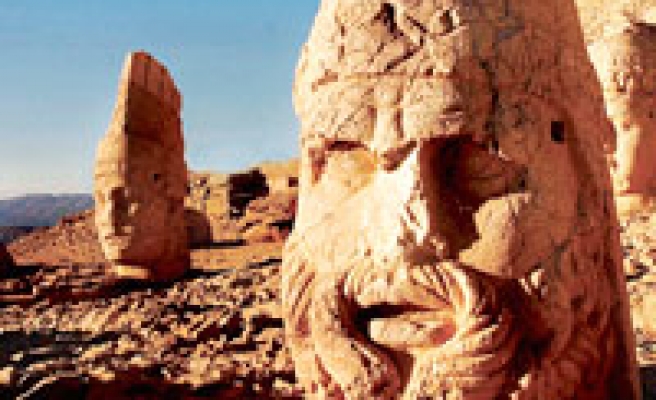 ‘Throughout my whole life I was seen by all to be of my kingdom the most trustworthy guardian, and one who considered holiness to be an inimitable joy.

Because of this, great dangers did I unexpectedly escape, and unhoped-for deeds did I skillfully accomplish, and a life of many years did I fill out in blessed fashion.’

These immodest words belong to one Antiochus I Epiphanes, ruler of the remote kingdom of Commagene between 69 and 31 B.C. They form part of a cult inscription, written in Greek, on the base of the stone thrones of a series of magnificent statues atop the 2,150-meter Mt. Nemrut in the southeast of Turkey. Antiochus’ vainglory knew no bounds. Not content with claiming descent from Alexander the Great on his mother’s side and Darius the Great on his father’s side, he declared himself the equal of the gods.

Determined to keep his subjects in awe Antiochus ordered the construction of a monumental cult worship and funerary complex on the highest peak in his kingdom. Even today, despite losing a third of its original height over the centuries, the massive tumulus built to house Antiochus’ body can be seen from over 100 kilometers away. It has even made the Guinness Book of Records as the world’s largest man-made mound -- a shade under 60m high and covering an area of 7.5 acres. Comprised of stone shards (left over from the carving of the statues) the tumulus has, so far, resisted the attempts of archaeologists to find the grave chamber of Antiochus assumed to lie at its heart.

Around the base of the tumulus are three terraces. The most important of these was the on the east. Here Antiochus I had his minions build a temple, which contained an altar. On Antiochus’ birthday and again on the anniversary of his accession to the throne, libations were poured and sacrifices were made in honor of the gods (which included of course Antiochus I himself!). Thousands of the inhabitants of his kingdom would have paid homage to both their gods and their ruler on these two days, toiling along the processional way leading up to the mountain-top sanctuary. The temple itself has gone, as has the altar, but the sandstone ceremonial plinth on which they stood remains -- large enough to be used as a helicopter landing-pad for visiting dignitaries.

For those of us who are neither priests of old, nor dignitaries, the best use of the plinth today (or rather the steps leading up to it) is as a seat from which to contemplate the massive statuary at the foot of the tumulus. Despite the fact that all the heads of the statues have toppled from their monumental bodies, they are still one of the world’s most awe-inspiring ancient remains. Befitting a tiny kingdom straddling the ancient borders between the Greek-Roman world of the west and the oriental Persian world to the east, the gods portrayed are a fusion of the two civilizations.

On the right is the Greek demigod Heracles with his trusty club, but he is wearing a Persian-style hat and diadem, and also represents his Persian equivalent, Artagnes. To his left is the Greek god Apollo. Like Heracles, he sports a diadem, and is also meant to represent the Persian god of light, Mithras. Even the largest statue, that of the overlord of the Greek pantheon of gods, Zeus (seated in the centre of the row) has been fused with the most important Zoroastrian (Persian) god, Ahura-Mazda. The sole female figure, the goddess Commagene/Tyche, symbolizes the fertility of the kingdom with her hands full of fruit. Last but not least, on the extreme left of the line-up, comes Antiochus I. In an attempt at modesty, he at least had the grace to allow Zeus to take centre-stage. The row of statues on the sunrise facing west terrace exactly mirrors that of the east, and on both terraces the gods are flanked by an imperious eagle and a disconcertingly cuddly lion. The fusion of Eastern and Western dress and beliefs exhibited in these statues is known as syncretism, and was propounded by Alexander the Great and his successors to help bind the peoples of the former Persian Empire with their Greek conquerors.

In the end though syncretism was not enough to save the independence of Antiochus I and his successors, who were eventually absorbed into the empire of that most pragmatic of races, the Romans. Over the centuries the Commagene kingdom was forgotten, and it was not until the 19th century that anyone showed any interest in the funerary-complex of the Commagene king, Antiochus. The first written record was by a German military official called Moltke, reconnoitering the area in 1835. He used the summit of Nemrut as a reference point while mapping the region, but never actually reached it. That honor was left to fellow countryman Karl Sester. An engineer employed by the Ottomans to find new communication routes across Anatolia in 1881, he sent a letter home informing them (wrongly as it turned out) that he had come across some Assyrian remains. A joint Turkish/German team worked at the site for a couple of years, but it was not until 1938 that more research on the site took place.

As late as the early 1960s the normally comprehensive Blue Guide failed to even mention Mt. Nemrut in its guide to Turkey. It is hard today to envisage just how remote this site was until quite recently. Early visitors had to walk or ride miles to the summit from remote villages on the mountain, and the nearest big towns (Gaziantep and Malatya) were themselves relatively isolated and lacking in a tourist infrastructure. Even today the site remains very difficult to access in the winter, as snow and ice soon block or make impassable the steep road leading to the summit area.

Of course it is this very remoteness that gives Nemrut its unique appeal. Where else in the world can statues of Greek/Persian gods up to eight meters in height and weighing up to 105 tons be found at the very summit of a 2,150-meter peak? Add to this the mystery of the whereabouts of Antiochus’ final resting place, the stunning sunrises and sunsets which bathe the statues in a soft, warm light, and you can begin to see why Nemrut is now the most visited site in southeast Anatolia -- despite the hassle of getting there.

A final word. Most people visit Nemrut at either sunset or sunrise. Of course it is at its most atmospheric then, and a photographer’s dream. But it can be freezing cold (particularly at sunrise), crowded, and your visit hurried. If possible pay a visit during the daytime, when you’ll have the site more or less to yourself and can enjoy this wonderful folly at leisure.

Best times to visit: May through October, though sunrise and sunset will be chilly in the spring and autumn months. Snow may close the summit road between November and April, and in the depths of winter the statues are snow covered.

What to bring: Stout shoes for the half-hour walk to the summit, a fleece and windproof for dawn/sunset visits, water and sun cream if you are there during the heat of the day.

Reaching Nemrut (from Kahta): The small town of Kahta is the base most people use for the trip to the site on Nemrut. The nearest town to Kahta with an airport is Adiyaman, a half-hour bus journey away. Turkish Airlines flies from İstanbul to Adiyaman (once daily) and Ankara (twice weekly). From Kahta expect to pay YTL 50 for a tour including the Nemrut summit, the Karakuş tumulus, Cendere Bridge and Arsameia. Sunset trips depart at 1 p.m. and return at 9 p.m.; sunrise trips leave at 3 a.m. and return at 10 a.m..

The tourist office is the booking/departure point for minibus tours to Nemrut, which usually depart midday and return to Malatya the following morning at 7 a.m.. Included in the YTL 50 price is an overnight stay (and meals) at a moderate hotel a half-hour’s walk below the summit sanctuary. The entrance fee is extra. The main advantage in reaching the summit from Malatya is that you can see the site at both sunrise and sunset, the major disadvantage is that it misses the subsidiary sites.