George Charamba said that "This is an important milestone that has been registered in the interparty dialogue." 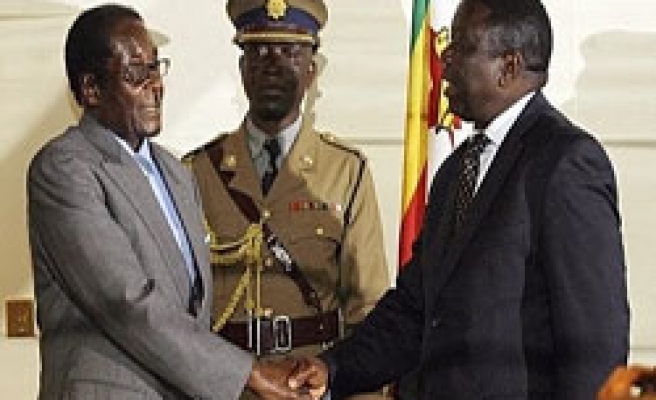 President Robert Mugabe's spokesman said on Saturday talks between Zimbabwe's ruling party and the opposition had reached a milestone, but he declined to comment on whether a power-sharing deal was imminent.

Zimbabwe mediator South African President Thabo Mbeki is expected to arrive in Harare on Saturday at about 1630 GMT and quickly meet both sides, said a senior Zimbabwean official.

Optimism has been growing that a deal would be reached soon.

"This is an important milestone that has been registered in the inter-party dialogue," Mugabe spokesman George Charamba told state media without giving details.

Mugabe's ZANU-PF and opposition leader Morgan Tsvangirai's MDC began talking more than two weeks ago to resolve a crisis that came to a head after the 84-year-old Mugabe was re-elected in a widely condemned June poll boycotted by the opposition.

Business Day said it was understood the two men were not "too far apart", though the central issues remain unresolved.

Mugabe said on Thursday the talks were going well but dismissed as nonsense media reports about a draft agreement under which Tsvangirai would run the country as prime minister while Mugabe would become ceremonial president.

Even if the two sides manage to reach a settlement, analysts say investors are likely to remain cautious, seeking signs of long-term political stability and sound management that will help rescue an economy debilitated by the world's highest inflation rate and 80 percent unemployment.

Business Day said Mugabe and Tsvangirai were said to have been in contact several times during the talks to seek common ground on the delicate issue of power and positions.

The two sides are under heavy pressure to resolve a deepening crisis that has ruined the once prosperous economy and flooded neighbouring states with millions of refugees.

Any deal would require a green light from security and military chiefs, powerful figures with wide sway over Mugabe who want to make sure they are not vulnerable to international prosecution when the political dust settles, analysts say.

Should an agreement be reached, it could take at least two weeks to convene parliament and push through expected constitutional changes creating new government posts and implement other aspects of the deal, analysts say.

Helping to secure a settlement before he hosts an Aug. 16 summit in South Africa of regional leaders he has represented in the mediation could be a political coup for Mbeki.

Mbeki has come under intense criticism at home and abroad for not taking a tough line with Mugabe, a policy he argues would only backfire and deepen tensions.
Reuters