Murtha: Move trials out of Guantanamo

Pennsylvania's Rep. John Murtha yesterday said he would start pushing the Bush administration to move military trials for high-level terrorism suspects from the controversial detention facility at Guantanamo Bay in Cuba to the U.S. mainland. 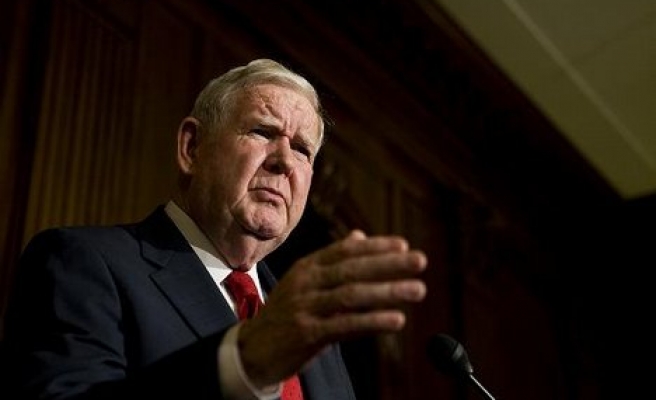 Such a step, he argued, would help improve the nation's image abroad after years of negative publicity surrounding the prison camp, which first opened in January 2002 and now holds about 380 detainees.

"We don't want anybody released who is a threat," Mr. Murtha, D-Johnstown, said after a hearing of the House Defense Appropriations Subcommittee. "But, on the other hand, we have to get them a fair trial."

As the subcommittee chairman, Mr. Murtha is the highest-ranking House member in charge of defense spending, and he has threatened to use his power to cut off funding for Guantanamo, effectively forcing its closure. But he backed off from that stance yesterday, saying it wasn't practical.

Instead, he hopes to address concerns from some legal advocates that the prison is too remote to allow regular access between detainees and their lawyers and that it cannot accommodate a large number of court proceedings.

Defense Department officials, however, seemed cool to the idea of moving the trials or holding detainees in the United States, arguing that new locations would be easier targets for terrorists. "I believe we're holding the right men in the right place for the right reasons, and we're doing it the right way at Guantanamo," said Rear Adm. Harry B. Harris, the prison's commander.

Daniel J. Dell'Orto, a Defense Department deputy general counsel, expressed concern that the legal status of detainees would change if trials were held on U.S. soil. He also warned that the trials could become a "media circus."

Mr. Murtha pointedly probed some of Mr. Dell'Orto's arguments. "We spend more than any country in the world on intelligence, and you're telling me that closing down Guantanamo would cripple our intelligence efforts?" he asked Mr. Dell'Orto.

"If you take away those capabilities, it would cripple our efforts," Mr. Dell'Orto replied.

"You see why I've said I have such a hard time believing the kind of information I get," Mr. Murtha responded. "That's a real exaggeration."

For more than five years, the question of how to handle terrorism suspects caught in Afghanistan, Iraq and elsewhere has hampered the Bush administration, with the Supreme Court twice ruling that detainees have the right to contest their imprisonment.

Congress last year passed a law that prevents detainees from filing such appeals, and, in April, the high court declined to hold a new hearing on the issue.

But concerns about Guantanamo's future haven't gone away. Both President Bush and Defense Secretary Robert M. Gates have said they would like to close the facility eventually, while some legal groups have said there are serious doubts about the connections between some detainees and terrorist groups.

"I think that Guantanamo should be closed, and it should be closed quickly," said Thomas B. Wilner, a Washington, D.C., lawyer who has represented several detainees. "It's against everything we stand for as a nation."

Defense officials said much of their evidence cannot be made public because of security concerns. "It's a very common thing for these guys to say they're cooks," said Joseph A. Benkert, a deputy assistant secretary of defense for global security affairs.

Some detainees even convinced U.S. officials of their innocence, he said. Since Guantanamo's opening, the government has released about 30 detainees who eventually forged new connections with terrorist groups. The military now has significantly tighter procedures for releasing prisoners.

Of the roughly 380 detainees now being held, about 60 to 80 are likely to face military tribunals over the next few years. About 80 can be released in the near future, but the United States must first negotiate that process with foreign governments.

Afghans, Saudis, and Yemenis make up the top three nationalities among detainees.

Mr. Murtha said his office would draw up a list of possible sites.