Musharraf Days Are Over: Sharif

Pakistan's embattled President Pervez Musharraf is in a lose-lose situation and his days in power are almost over, exiled former premier Nawaz Sharif believes. 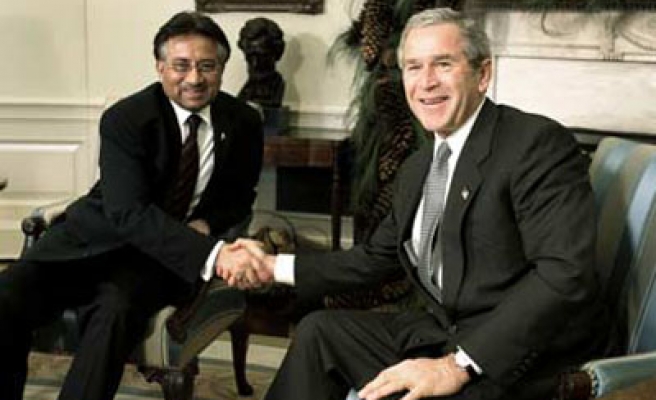 Pakistan's embattled President Pervez Musharraf is in a lose-lose situation and his days in power are almost over, exiled former premier Nawaz Sharif believes.

"His options are totally exhausted and starting from today [his fall] is simply a matter of time," Sharif told The Times on Wednesday, May 16.

The ex-premier, who was ousted from office by Musharraf in a 1999 bloodless coup, insisted that the president-in-uniform "is a gone man now."

Musharraf suspended the top judge on March 9 over unspecified accusations of misconduct, outraging the judiciary, lawyers and the opposition.

Critics say Musharraf dismissed him to ensure a pliant judiciary in case of legal challenges against his intention to seek another five-year term as president-in-uniform from the outgoing parliament, stacked with his supporters.

The judicial crisis has snowballed over the past two months, ending up with last weekend's street battles and protest in the southern port city of Karachi, Pakistan's second biggest city.

It is the most serious challenge to his authority since he seized power in a military coup in 1999.

Ex-Premier Sharif, who spent eight years in exile in Saudi Arabia, Dubai and now London, says that Pakistanis have come to the conclusion that Musharraf's regime can no longer be tolerable.

"Protests are in every nook and cranny of the country," he added.

"It is a positive development that people are realizing that the dictator is destroying institutions."

Forty-one people were killed and about 150 wounded in the southern city of Karachi last week in the worst political street violence in two decades.

The violence began when Chaudhry tried to meet supporters in the country's second biggest city.

Opposition parties have called for a nationwide "black day" of strikes, business shutdowns and protests over the bloodshed.

It was the first time since Musharraf took power that a strike call had been so widely observed.

Pakistan faces a referendum on Musharraf's rule before the end of the year.

Critics say Musharraf dismissed the top judge to ensure a pliant judiciary in case of legal challenges against his intention to seek another five-year term as president-in-uniform from the outgoing parliament, stacked with his supporters.

Under an agreement reached with his political allies in 2004, Musharraf should have chosen between being chief of the powerful Pakistani army (top military post) or head of the state (top civilian post) by the end of the year.

He has not since then.

The exiled leader of Pakistan's Muslim League-N (PML-N) argued that for years Musharraf was "hoodwinking the international community telling them that he is the only option except extremists.

"That is absolute rubbish," Sharif said.

He also had some very critical words for US president George W. Bush over his unwavering support of his key ally in the region.

"I feel personally let down by Mr. Bush," said Sharif.

He argued that to court one man "Mr. Bush is alienating 160 million Pakistanis."

Shortly after the 9/11 attacks, Musharraf's Pakistan abandoned its support for the Taliban movement in Afghanistan and became a front-line ally in the US-led "war on terror."

Sharif insists that Musharraf should have consulted with parliament and the people before backing the American invasion of neighboring fellow Muslim Afghanistan.

Musharraf is "erratic, unpredictable and impulsive — I don’t know what President Bush thinks of that." Last Mod: 17 Mayıs 2007, 00:09
Add Comment