Pakistan's ruling party will soon replace beleaguered President Pervez Musharraf with its own candidate, the head of the party said. 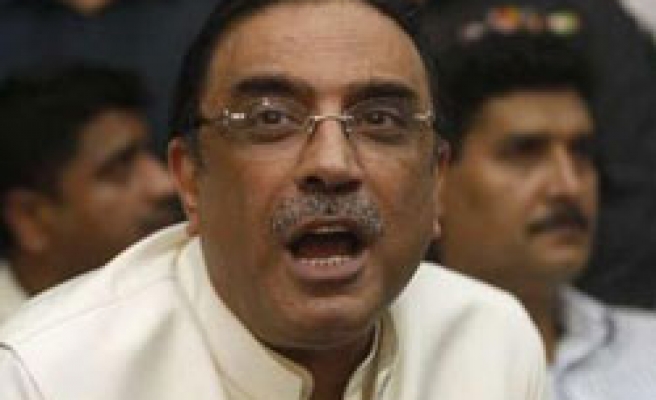 The statement of intent by Asif Ali Zardari, widower of assassinated former prime minister Benazir Bhutto, has cranked up speculation U.S. ally Musharraf, who came to power as a general in a 1999 coup, could quit within weeks or months.

"The day is not far off when we will call upon a People's Party man to become the president of Pakistan," he said to cheers from Pakistan People's Party activists at a meeting in the eastern city of Lahore on Thursday.

"The day is not far off, my brothers and sisters, when this gathering will be held in the president's house and God willing, your president will be sworn in and he will raise the slogan of 'long live Bhutto'."

Musharraf has seen his power wane and his isolation grow since his allies were trounced in a general election in February, which resulted in a PPP-led coalition government.

He faces calls to resign and some of his critics even want to see him put on trial for violating the constitution, though his foes lack the numbers in parliament to impeach him.

Zardari has been reluctant to confront the unpopular Musharraf, which could lead to more turmoil in the country.

Even though Zardari says he considers Musharraf an unconstitutional president, the party is trying to work out a dignified exit for him, hoping he will step down, party officials say.

The president is not involved in the day-to-day running of the country but has important powers, including to dismiss the National Assembly and appoint military chiefs.

Musharraf's fate is expected to be a main issue in talks later on Friday between Zardari and his uneasy coalition partner, former prime minister Nawaz Sharif, whose party came second in February.

Sharif, the prime minister Musharraf overthrew in 1999, wants to see Musharraf ousted and put on trial, and has even raised the possibility of him being hanged for treason.

The leaders of the two main coalition parties also disagree on the fate of dozens of judges Musharraf dismissed when he imposed emergency rule in November to stop the Supreme Court ruling on whether his re-election while army chief the previous month was legal.

Last month Sharif pulled his ministers out of the cabinet, though it has pledged continued support for the government.

Having secured the presidency, Musharraf stepped down as army chief and ended emergency rule in December, but his earlier actions outraged many people and contributed to the humiliating February defeat of the former ruling party that backs him.

Zardari has proposed a constitutional package that would strip Musharraf of power, but possibly afford him legal protection from prosecution to pave the way for him to quit.