Officials said the muskrat was either seeking food or building a den when it dug the hole that brought the levee down. 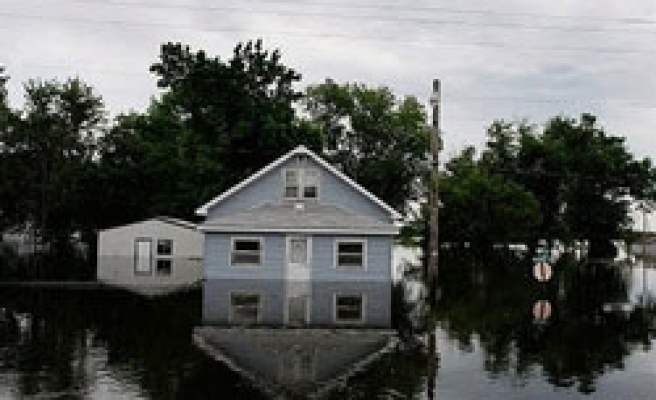 The Mississippi River on Friday burst through an earthen levee that may have been weakened by burrowing muskrats, swamping a Missouri town and adding to billion-dollar losses in U.S. Midwest flooding that has fueled fears of soaring world food prices.

A heroic effort by hundreds of townspeople, volunteers and National Guardsmen to hold back the Mississippi River failed Friday - undone by a burrowing muskrat.

The furry rodent dug a hole through the earthen levee in this eastern Missouri community, allowing water to penetrate the floodwall, which failed shortly before dawn.

"It's so disappointing," said Linda Wilmesherr as she peered through binoculars at water pouring through a gap that appeared to be 30 feet wide. "With all the guns in this county, couldn't we kill a muskrat?"

But within hours, defiant residents were mounting a new defense - a quickly constructed 4-foot-tall sandbag levee to protect 100 homes in the floodwaters' path.

"We're not quitting - the Army doesn't quit," said National Guard Col. Michele Melton. "That's why we're here - to try and save these people."

Many of the 720 residents of Winfield and people from nearby communities have spent the last several days helping the National Guard patch one trouble spot after another.

Ms. Wilmesherr operates a horseback riding school and suspended her business so she and her employees could bring in equipment and help save the levee.

In the end, their efforts were undone by an animal weighing no more than 5 pounds. Officials said the muskrat was either seeking food or building a den when it dug the hole that brought the levee down.

"How bad do I feel? You have no idea," said Travis Tutka, the Army Corps of Engineers' dam safety expert who helped coordinate the effort to save the levee. "The challenge we met for so long out here - I can't come up with the words for the feeling. The levee did as well as it did because of the resolve of the people who worked on it."

The only good news was the location of the breach - at the far southern corner of the levee. That meant floodwaters would have to cover 3,000 acres before approaching a cluster of homes at the north edge of the flood plain - a process that would probably take several hours.

Col. Melton was confident the sandbag levee would be up by then. With 30,000 sandbags already filled, she figured guardsmen could construct a wall at a pace of about 300 feet per hour. The wall will be about a half-mile long.

The muskrat holes, which had been covered by sandbags, were discovered Monday. They allowed constant pressure from the river to turn the relatively small, private levee to mush. By midweek, mudslides formed, and levee workers who walked atop the berm said it felt like a waterbed.

Officials constantly checked for weak spots. At 4 a.m. Friday, three corps officials visited the south end of the levee and all was fine. At 5:03 a.m., National Guard members saw the break. Water was already pushing away sandbags, and it was too late to save the levee.

A siren sounded, and sheriff's deputies went door-to-door to get everyone out of the homes, yelling, "The levee broke! Get out!"

Missouri National Guardsmen erect a temporary wall after a muskrat burrowing in a levee allowed water to penetrate in Winfield, Mo., Friday. Officials say the muskrat was either seeking food or building a den.

Winfield resident Debbie Halcomb, 52, was sleeping in a bed elevated on milk crates to protect it from potential floodwaters when she heard the siren.

"Oh my God. I was hoping it would hold, but it didn't," she said. "I think we probably lost it on this last bunch of rain."