Leaders of the eight nations comprising nearly one billion people said at the summit in Kuala Lumpur that the twin problems of food and energy security were putting a severe strain on their countries, especially on the poor. 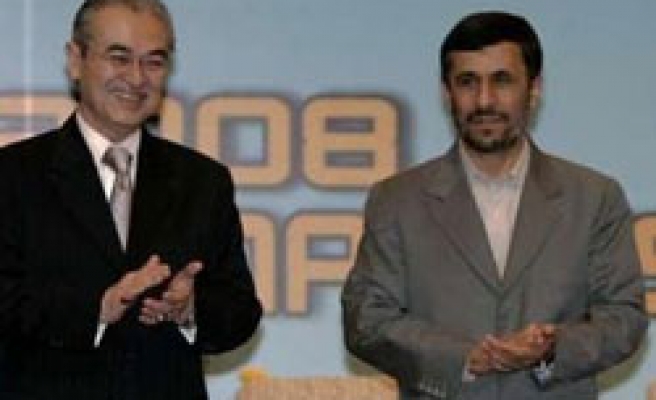 Warning that escalating food and fuel prices could lead to disaster, a group of developing Muslim nations called on Tuesday for urgent measures to lift food and oil output and a rethink on bio-fuels.

Malaysia and Indonesia, the world's largest producers of palm oil, told the summit of eight developing Muslim-majority countries (D8), that they wanted to see an end to the conversion of arable land for bio-fuel production.

Palm oil is used as a feedstock to produce biofuel and also widely consumed in the region as cooking oil.

Leaders of the eight nations comprising nearly one billion people said at the summit in Kuala Lumpur that the twin problems of food and energy security were putting a severe strain on their countries, especially on the poor.

"We must act on it once and in concert. To delay action on this great challenge of our time is to court disaster," Indonesian President Susilo Bambang Yudhoyono told the meeting.

Yudhoyono's popularity in his country has slumped because of a fuel price hike which also sparked numerous street protests.

Other leaders, including host Malaysian Prime Minister Abdullah Ahmad Badawi, also painted a gloomy picture of the crisis, which has seen crude oil prices at record highs and food prices rising by more than 75 percent since 2000.

"There is also the danger of the food crisis creating political unrest in many societies," Abdullah said. "I think this meeting must come out with a clear message on the need to boost food production in the world."

Abdullah's popularity has also taken a beating after his government hiked up fuel prices.

The leaders are expected to discuss a Malaysian proposal for joint investments in food-related projects such as a fertilizer plant.

"If we can have a big economic project, a big fertiliser project as a D-8 project to cater for the needs of its members as well as for exports, I think that will be very good," Abdullah told Reuters in an interview on Monday. "Some of the D-8 countries are also oil producing countries, that can assist us."

Most fertiliser plants use gas and naphtha as feedstock.

Yudhoyono and Abdullah told the meeting that the bio-fuel frenzy has worsened the global food crisis.

"We must not allow the zeal for energy security to come into direct conflict with the basic needs for food production," Abdullah said.

An estimated 1 percent of the world's arable land is used for biofuels, a figure that will rise to between 2.5 and 3.8 percent by 2030, depending on policy incentives in different countries, according to International Energy Agency figures.

And use of food such as maize, palm oil and sugar to produce biofuel has been blamed in part for record high commodity prices which are driving millions of people into hunger.

But the expansion of Malaysia and Indonesia's palm oil driven biodiesel industry has been hampered by sky-high prices of the commodity which is also used in hundreds of food products and in a wide range of consumer goods from soap to cosmetics.