A grand mosque in Germany and dozens of Muslim graves in France have been desecrated with swastikas and Nazi slogans in a new series of Islamophobic incidents in the two European countries. 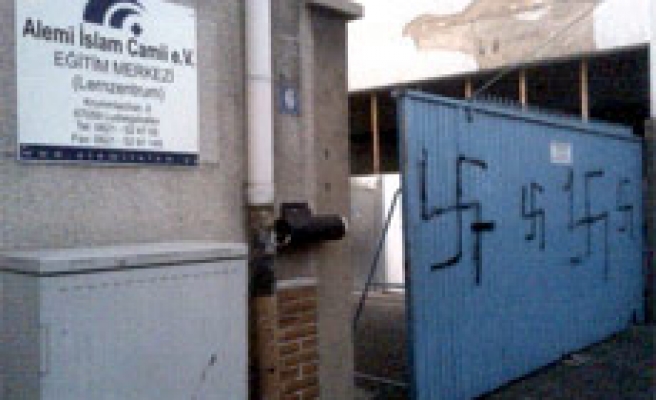 The walls of the grand Alemi Islam mosque in the German city of Ludwigshafen were daubed with a plethora of swastikas and right wing slogans.

Muslim worshippers have reacted with anger and astonishment as the mosque stands as a symbol of successful Muslim integration into society and is known for its inter-faith bids.

They blasted the culprits behind the defamation, saying the sacrilege is throwing a spanner in the good Muslim works.

The mosque is no a source of problems in the state and no one has opposed its construction four years ago unlike residents in other German cities, who often stand firmly in the face of a Muslim place of worship in their local areas.

It is known for its inter-faith open-days, receiving hundreds of non-Muslims yearlong to acquaint them with the true image of much stereotyped Islam.

There are some 3.4 million Muslims in Germany, including 220,000 in Berlin alone. Turks make up an estimated two thirds of the minority.

Islam comes third in Germany after Protestant and Catholic Christianity.

Muslims celebrated earlier this month the birth of an umbrella representative body grouping the country's four largest Muslim bodies, a move expected to allow the sizable minority to speak with one voice for the first time.

In France, Nazi slogans and swastikas were daubed Thursday on about 50 graves in the Muslim section of a French WWI cemetery, the BBC News Online reported.

The military cemetery, near Arras in the north of France, is one of the country's biggest and is on the site of some of the war's early battles.

About 78,000 colonial subjects of France, including many Muslims from North Africa, died in the war.

French President Jacques Chirac said the desecration "was an unspeakable act that scars the conscience".

"This desecration is all the more shocking because it affects the graves of fighters who gave their lives for France," Chirac said in a statement.

The official prosecutor's office said none of the graves had been destroyed.

The incident is not unprecedented in France. The last report similar incident took place last September when vandals scrawled swastikas and racist slogans on the walls of two mosques in the two cities of Quimper and Carcassonne.