This year an unprecedented half a dozen Egyptian athletes, three Iranians, an Afghan and a Yemeni will compete with covered heads. 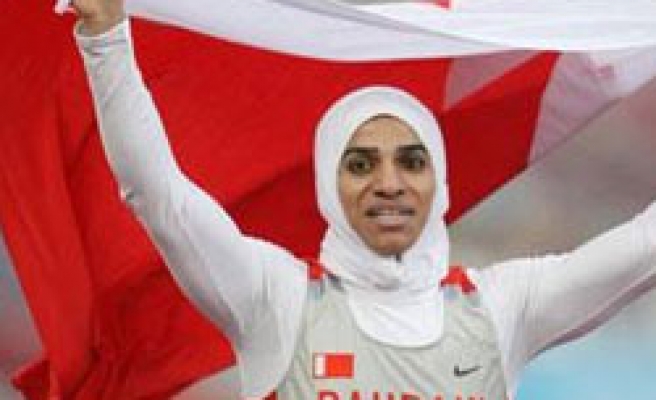 This year an unprecedented half a dozen Egyptian athletes, three Iranians, an Afghan and a Yemeni will compete with covered heads.

The women in Roqaya Al Ghasara's home town in Bahrain are so proud of their pioneering Olympic sprinter that some of them got together to design and sew a set of tailor-made aerodynamic veils for her to run in.

Egyptian fencer Shaimaa El Gammal, a third-timer at the Olympics, will don Islamic headgear in Beijing for the first time. She says it is a sign she is come of age and she feels more empowered than ever.

"The hijab has never been a problem for me. In Bahrain you grow up with it," said Al Ghasara. Her baggy running gear exposes only her face and hands.

"There are more women in sport all the time from countries like Qatar and Kuwait. You can choose to wear the hijab or not. For me it's liberating," added Al Ghasara, whose close-fitting running veils come in red or white, the Bahraini colors.

"People see us wearing the scarf and think we ride camels. But Muslim women can do anything they want," said El Gammal, a bubbly 28-year-old whose sister will compete in the same event, also wearing Islamic head cover.

"When I fence I'm proud that I'm a Muslim. It's very symbolic for women in my country," El Gammal told Reuters.

This year's Games will see a sizable sprinkling of veiled athletes who are determined to avoid offending devout Muslims back home while showing skimpily dressed rivals there is nothing constricting about wearing a hijab. Last Mod: 12 Ağustos 2008, 13:41
Add Comment