Tens of thousands marched peacefully past the United Nations office in Srinagar, calling on the international body to intervene over the region that Pakistan and Indian claim in full but rule in parts. 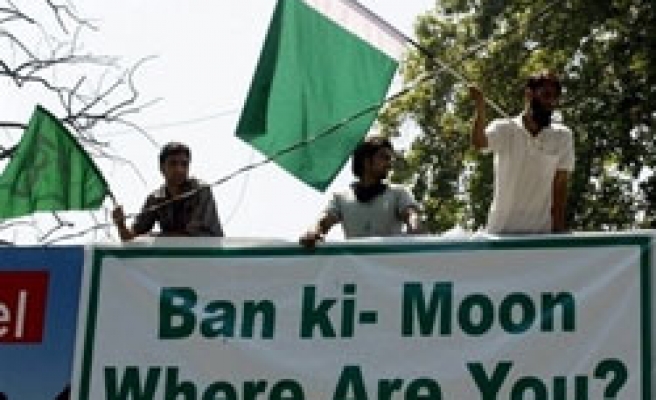 Shops, businesses and schools opened in Indian Kashmir for the first time in two weeks on Tuesday, as Muslims called for three days of calm after the biggest protests in two decades against New Delhi's rule.

Hundreds of people queued outside banks in Srinagar, the summer capital of Indian Kashmir, and crowds thronged around markets to buy essential supplies.

"There was little food left in our house, it is good they have called off protests for sometime," Mohammad Yaqoob said near a grocery shop.

A dispute over land for Hindu pilgrims visiting a shrine in Kashmir snowballed into full-scale rallies this month, boosting Muslims who want India's only Muslim-majority region to secede.

Police have killed at least 22 Muslim protesters, including a senior separatist leader and wounded 180 others in some of the biggest demonstrations since a rebellion against Indian rule broke out in 1989.

The largest protest took place on Monday when tens of thousands marched peacefully past the United Nations office in Srinagar, calling on the international body to intervene over the region that Pakistan and Indian claim in full but rule in parts.

"Keeping in view the hardships of people we have decided to give relaxation in the strike on Tuesday, Wednesday and Thursday," Mirwaiz Umar Farooq, chairman of All Parties Hurriyat (Freedom) Conference, said.

The recent crisis began after the state government promised to give Kashmiri forest land to a trust that runs Amarnath, a cave shrine visited by Hindu pilgrims. Many Muslims were enraged.

The government then rescinded its decision, which in turn angered Hindus in Jammu who attacked trucks carrying supplies to the Kashmir valley and often blocked the region's highway, the only surface link with the rest of India.