Muslims to have wide economic powers in Manila deal

The territorial deal, which expands an existing six-province autonomous region, and took over 10 years to negotiate, is set to be signed in Kuala Lumpur on Tuesday. 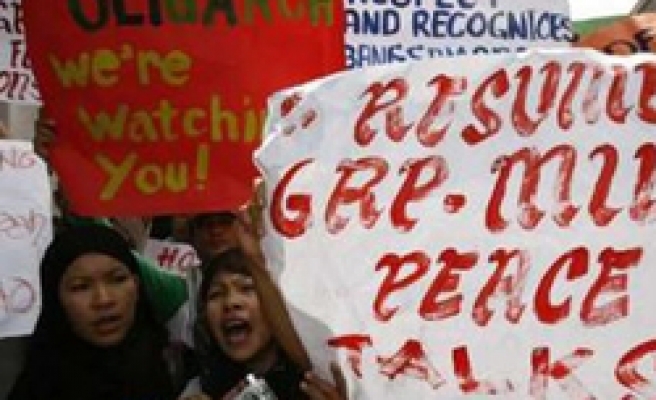 Muslims in the southern Philippines would have wide powers over their resource-rich local economy, including the right to revoke existing mineral contracts, if an eventual peace deal is agreed with Manila.

According to a copy of a territorial agreement, given to Reuters on Sunday, a future government of a new autonomous Muslim region, known as the Bangsamoro homeland, would have full responsibility for land use, the right to explore and exploit all potential sources of energy, both onshore and offshore, and the right to develop mineral resources.

"It is essential to lay the foundation of the Bangsamoro homeland in order to address the Bangsamoro people's humanitarian and economic needs as well as their political aspirations," the document reads.

The territorial deal, which expands an existing six-province autonomous region, and took over 10 years to negotiate, is set to be signed in Kuala Lumpur on Tuesday.

If peace talks fail or stall, which analysts say is highly likely, the territorial deal will not go through. Legal attempts to halt it have already started and Catholic politicians have called protests against it for Monday.

A wider homeland could include, subject to plebiscite, an area on the western island of Palawan where Coral Bay Nickel Corporation, a nickel processing company, majority owned by Japan's Sumitomo Metal Mining is based.

The agreement also gives a government of the Bangsamoro homeland joint jurisdiction with Manila over wide areas of the Sulu Sea where deposits of oil and gas are located.

Muslims in the south have been seeking independence for over 40 years.

A formal peace deal would be a huge boost for the poorest region in the Philippines with an average annual income of 89,000 pesos ($2,012) in 2006, according to the government's latest data. The comparable figure for Manila was 311,000 pesos.

Under the territorial deal, the Bangsamoro government would earn 75 percent of central government revenues from the exploitation of minerals and other natural resources, be able to set up trade missions in foreign countries and participate in meetings of the Association of South East Asian Nations.

But it would not have control over defence, foreign, postal and monetary policy.