Philippine military planes bombed Muslim positions for a second day raising fears of a humanitarian disaster in the south after nearly 130,000 people were forced to flee the fighting. 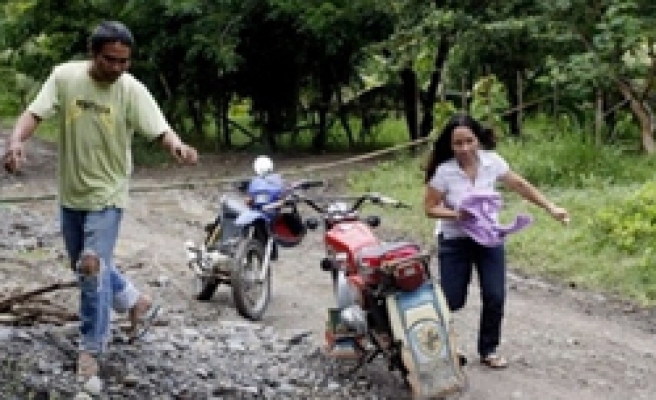 About 1.6 million Muslims in the south of Philippines are choosing on Monday a new governor, a vice governor and 24 members of a regional legislative assembly to serve for three years in the Autonomous Region in Muslim Mindanao (ARMM).

Also, Philippine military planes bombed Muslim positions for a second day raising fears of a humanitarian disaster in the south after nearly 130,000 people were forced to flee the fighting.

The military insisted the clashes would not spread and said voting in local polls in the six-province Autonomous Region of Muslim Mindanao (ARMM) in the south had not been disturbed.

The National Disaster Coordinating Council (NDCC) said 129,819 people had been displaced from 42 villages in North Cotabato province since the fighting began last week.

Lieutenant-General Cardoza Luna, the military's deputy chief, told reporters "we were able to contain the fighting in North Cotabato areas and we don't see it spreading across the Muslim areas."

The Moro Islamic Liberation Front had called for elections to be cancelled because they want a new Muslim homeland with more political powers established as part of a peace deal.

More than 500 guerrillas have refused to leave Catholic farmlands in 15 villages in North Cotabato province. Manila, smarting from accusations it had abandoned the majority Christians, has vowed to flush them out.

So far, one soldier and two fighters have been killed and a dozen troops wounded. A civilian was shot dead when a stray bullet hit a passenger bus on a main highway. Five civilians were also wounded in the crossfire.

Nearly 130,000 people have fled, including many from nearby Muslim areas.

An agreement on the size of a Muslim homeland and a future government's powers, including rights over exploring and developing mineral reserves, oil and gas, was halted last week by the Supreme Court amid protests by Catholic politicians.

Election officials said despite the bombs, voter turnout was good in ARMM.

An estimated 1.6 million people will choose a new governor, a vice governor and 24 members of a regional legislative assembly that would serve a three-year term.