Mussa to Peres: 'Do not take us for granted, we are not fools' 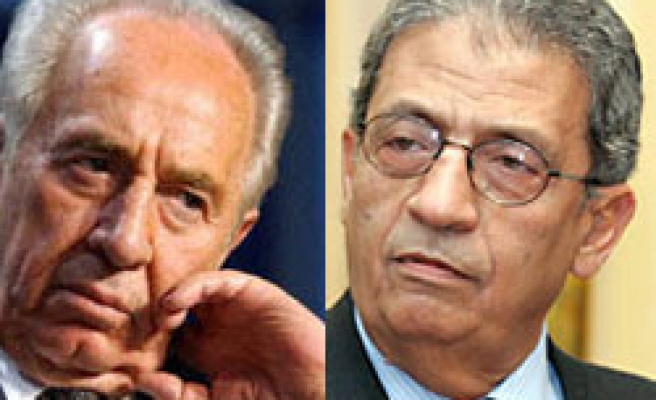 The dispute erupted at a working lunch during a conference of Nobel laureates at Jordan's World Heritage Site of Petra, said the witness who was attending the luncheon.

Peres said in a speech that Arabs "should follow the path of peace like the late Egyptian president Anwar Sadat and (late) King Hussein" of Jordan, who both signed peace treaties with Israel, sparking Moussa's ire, the source added.

Moussa interrupted Peres and told him: "You are a maestro in talking, but don't take us for granted because we are not fools," according to the source.

"You talk about peace, but we did not hear Israel's opinion about the Arab peace initiative," Moussa reportedly added.

Moussa was referring to the 2002 plan by which the Arabs offered to fully normalize relations with Israel in return for a full Israeli withdrawal from territories it occupied in the 1967 Middle East war.

In a tit-for-tat reply Peres said: "We have withdrawn our army from Gaza and removed our settlements there, but Hamas continues to fire rockets. Stop the rockets and we will give you something fair."

But Moussa rebuked him saying: "Stop building settlements. You keep constructing settlements and demolishing Palestinian homes. What peace are you talking about?"

Moussa then stormed out of the room only to return after being persuaded by Jordanian Foreign Minister Salah Bashir, the source added.

Continued Israeli settlement construction in the occupied West Bank and east Jerusalem is seen as a major hurdle to peace efforts.

Twenty-nine Nobel laureates are meeting in Petra for talks focusing on the global food crisis and other development issues.