Suu Kyi has been confined for nearly 13 of the past 19 years, with her telephone line cut and all visitors barred apart from her cook and occasionally her doctor. 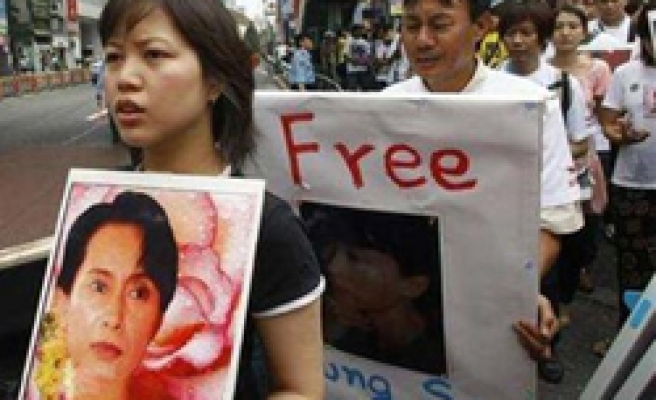 Military-ruled Myanmar could release detained opposition leader Aung San Suu Kyi in about half a year, once a maximum detention period of six years has expired, Singapore's foreign minister said on Sunday.

The Nobel peace laureate's confinement to her lakeside home in Yangon was extended in May despite international pleas to the generals to end her latest stretch of detention, which began in May 2003.

"And he told us the six-year limit will come up in about half a year," Yeo said after a dinner with his Southeast Asian counterparts in Singapore.

Asked whether this meant Suu Kyi could be released in six months, he said: "I am just repeating to you what he (Nyan Win) told me and I think that is not an inaccurate inference."

Suu Kyi has been confined for nearly 13 of the past 19 years, with her telephone line cut and all visitors barred apart from her cook and occasionally her doctor. It was not clear what the expiry of the six-year period Nyan Win referred to would have in practice.

Yeo's comments come as Southeast Asian nations prepare for a series of meetings this week amid political and economic turmoil that may slow, though not derail, the region's lofty dream of creating a European Union-style community.

Ministers from the Association of Southeast Asian Nations (ASEAN) will discuss the early ratification of a charter and establishment of a human rights body, whose 10-member nations includes juntas and kingdoms, democracies and communist states.

ASEAN has long been dismissed as a talking shop and the group's meeting have in the past often been overshadowed by disagreement over how to convince Myanmar's junta to start democratic reforms.

"We urge Myanmar to take bolder steps toward a peaceful transition to democracy in the near future, and working toward free and fair general elections in 2010," ASEAN's foreign ministers said in the draft of a communique to be finalized tomorrow.

The document also calls on the military, which has ruled the former Burma since 1962, for the release of all political prisoners and detainees.