Originally an estimated 30 million people were eligible to vote Saturday, but with the postponements in Yangon, it is unclear how many votes were delayed. 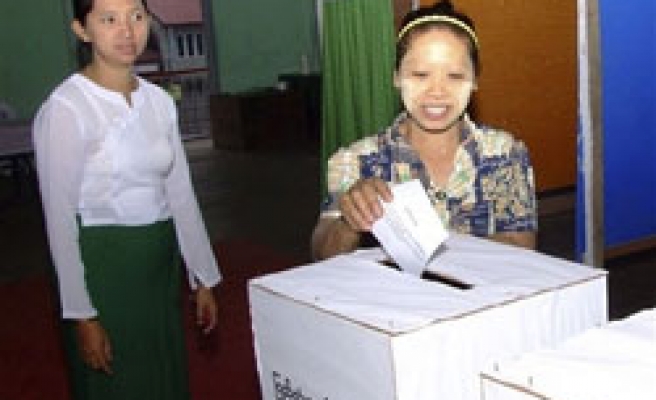 Myanmar's military rulers proceeded on Saturday to hold a referendum intended to cement their political power despite international appeals to postpone the vote in the wake of Cyclone Nargis that could have killed an estimated 100,000 people. Voting began at 6:00 am Saturday (2330 GMT Friday) as planned and was scheduled to end at 4:00 pm.

Although the junta has postponed the vote to May 24 in 47 of the townships worst-hit by the cyclone, including much of the former capital Yangon, it rejected international appeals to delay the controversial referendum and concentrate on providing emergency relief.

The referendum process, under the strict control of Myanmar's military masters, has been criticized by human rights activists and western democracies for being neither free nor fair. The regime has used both intimidation and vote-buying to assure the populace votes yes, and will predictably resort to vote-rigging if too many vote no, observers said.

"I was paid to vote yes so I did," said Zaw Min Hla, 24, a shop worker in Hlegu Township, Yangon, one of the few that was permitted to vote Saturday.

The referendum was postponed in 40 of Yangon's 45 townships, and in only seven townships in the much harder hit Irrawaddy delta.

Originally an estimated 30 million people were eligible to vote Saturday, but with the postponements in Yangon, home to 6 million, it is unclear how many votes were delayed.

Over recent weeks Myanmar's military has made clear through billboard and media campaigns that they expect the people to vote yes.

"I followed the correct sign on my ballot and voted yes," said Tin Mya, 77, also from Hlegu.

It is expected that many people will still vote no, but since criticizing the constitution in public is a crime, they are not likely to admit it.

"No" protest votes are expected to be especially high in the cyclone-hit areas, given the government's poor response to the disaster and deliberate interference with an international assistance programme.

An estimated 1.5 million people were affected by Cyclone Nargis, which crashed in to the central coastal region on May 2 and 3, leaving 23,000 dead and 42,000 missing according to official figures. Others estimate the death toll could reach 100,000.

The referendum is on a new constitution, drafted by a military-appointed forum, which will essentially allow the military control over future elected governments through a system of appointees in both the upper and lower legislative houses.

With many Burmese struggling for survival a week after the storm, the refusal to postpone the referendum seems an act of callousness that only this regime would dare carry out.

"According to Buddhist beliefs, people who are in mourning should go to the temple one week after the death of their loved ones and pray for them, so many people want to go to the temple today instead of the referendum," said Win Min, a lecturer on Myanmar affairs at Chiang Mai University in neighbouring Thailand.

Myanmar is a predominantly Buddhist country, but its military rulers have a long traditional of belief in numerology and astrology.

Myanmar's military supremo, Senior General Than Shwe, is believed to be the main proponent of continuing with the vote.

"He planned it so he does not want to change it, partly for astrological reasons and partly because he may be worried that things are going to get worse if he waits," said Win Min.

Than Shwe is also believed to be behind the regime's reluctance to grant visas to United Nations and other emergency relief experts who have been seeking to enter the country this week to facilitate a disaster relief effort for the Burmese people.

The junta has made clear that while they welcome aid, they want to distribute the goods themselves, a tactic that flies in the face of international norms.