A gold-encrusted sword Napoleon wore into battle in Italy 200 years ago was sold Sunday for more than $6.4 million, an auction house said. 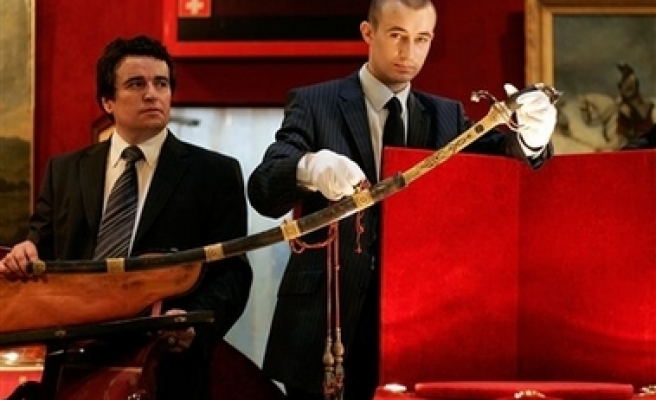 A gold-encrusted sword Napoleon wore into battle in Italy 200 years ago was sold Sunday for more than $6.4 million, an auction house said.

The last of Napoleon's swords in private hands, it has an estimated value of far less — about $1.6 million, according to the Osenat auction house managing the sale.

Applause rang out in a packed auction hall across the street from one of Napoleon's imperial castles in Fontainebleau, a town southeast of Paris, when the sword was sold.

Osenat did not identify the buyer, but said the sword will remain in Napoleon's family, which had put it up for sale. The auction house did not immediately elaborate on the details.

The intricately decorated blade is 32 inches in length and curves gently — an inspiration Napoleon drew from his Egyptian campaign, auctioneer Jean-Pierre Osenat said.

The sword was carried by Napoleon — who was not yet emperor — into the battle of Marengo in June 1800, when he launched a surprise attack to push the Austrian army from Italy and seal France's victory, auction house officials said.

After the battle, Napoleon gave the sword to his brother as a wedding present, and it was passed down through the generations, never leaving the family, according to the auction house.

The sword was declared a national treasure in 1978, meaning that under French law it could be sold to a foreign buyer but had to remain in France for at least five months per year. Last Mod: 11 Haziran 2007, 10:23
Add Comment