The Mars Phoenix Lander has found ice on the surface of the Red Planet. 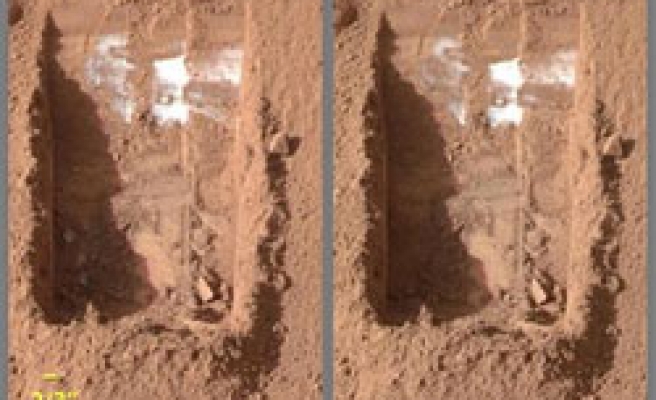 The Mars Phoenix Lander has found ice on the surface of the Red Planet, triumphant NASA scientists said on Thursday, a key discovery for the spacecraft as it searches for water and signs of life on Earth's closet planetary neighbor.

The proof came in a series of pictures sent back by Phoenix of a trench it dug with its robotic arm at the arctic circle of Mars, showing dice-sized chunks of white material that are seen to melt away over the course of several days.

"It is with great pride and a lot of joy today that I announce we've found the proof we've been seeking that this really is water ice and not some other material," mission principal investigator Peter Smith, of the University of Arizona, said at a press conference.

The presence of water on Mars is crucial because it is a key to the question of whether life, even in the form of mere microbes, exists or has has ever existed on Mars. On Earth, water is a necessary ingredient for life.

Scientists first discovered what they believed was a vast sheet of ice under the barren surface of the Martian north pole in 2002, when the Mars Odyssey Orbiter detected it through a hydrogen analysis while circling the planet.

Phoenix landed on May 25 and uncovered the white chunks when it dug a trench a few inches into the soil but NASA was at first cautious in pronouncing it ice because of the possibility that it could be salt.

But the sequence of photographs showed about eight dice-sized chunks slowly vanishing, confirming for the scientific team at about noon PDT (1900 GMT) on Thursday that it was water ice.

"It was just so incredibly convincing," Smith said of seeing the images for the first time. "There was no argument to be made anymore and we all just kind of applauded."

Though the scientists pronounced themselves "thrilled" with the discovery, it is only the first step in the primary mission of Phoenix to determine whether water has flowed on Mars and if life exists on the planet at any level.

"Now we know for sure that we are on an icy surface and can really meet the science goals our mission," Smith said. "I am just sitting on the edge of my chair, really, waiting to find out what (our instruments) can tell us."

Over the next several weeks the science team will analyze the ice and soil to determine its geologic history and look for organic material.

"Its really the modern history of these plains we're here to unravel," he said.

The $420 million lander spent 10 months journeying from Earth to Mars and has already analyzed soil samples scraped from the surface and put into its onboard laboratory.