Hundreds of Russian locals rallied in southern Russia, demanding the eviction of ethnic Chechens, witnesses and media said, reviving memories of racial riots in other parts of the country. 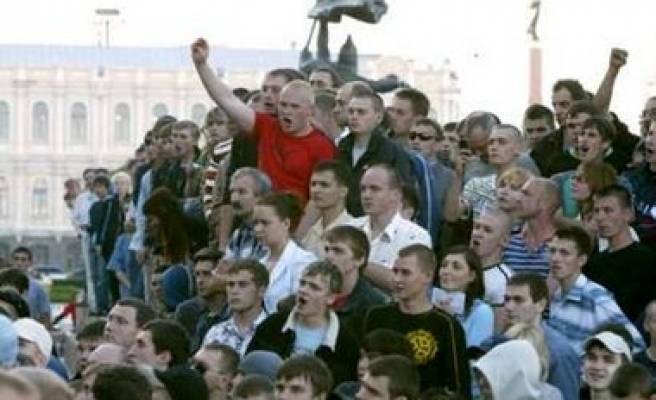 Hundreds of Russian locals rallied in the town of Stavropol in southern Russia on Tuesday, demanding the eviction of ethnic Chechens, witnesses and media said, reviving memories of racial riots in other parts of the country.

Thousands of people gathered earlier on Tuesday at the funerals of two young Russians knifed by unknown attackers on Sunday in this leafy town of some 350,000 residents, 1,700 km (1,060 miles) south of Moscow and bordering Chechnya.

Many people in the town, populated mainly by Slavs, believe Chechens killed the two Russians in revenge for the murder of a Chechen man on May 24 in clashes between local Chechens and Russians.

Hundreds of people gathered in Stavropol's main square, responding to calls in leaflets "to hold a Slav gathering."

"I would like to warn all those who would intend to take advantage of this trouble, and all kinds of volunteers from Moscow and the likes, that the law-enforcement system will punish them with all the rigor of the law," Dmitry Kozak, Putin's top troubleshooter for the Caucasus region, told Vesti.

A local television editor told Reuters by telephone from Stavropol: "The situation is really tense. Police forces are swarming in the streets, and the town is practically blocked,"

She said at least 1,000 people had taken part in the rally, and hundreds were still seen grouping in a nearby park.

"We are pretty much inclined to believe Chechens killed those Russians, although police want to present this as if Russians killed Russians," Yuri Berezin, a Russian nationalist activist who took part in the rally, told Reuters.

Stavropol's events revive memories of violent clashes between locals and Caucasus-born traders in the town of Kondopoga in northwestern Russia in September.

Trouble started in Kondopoga, a town of 40,000 people in the province of Karelia on the Finnish border, after a bar fight over an unpaid bill between locals and Chechens in late August. Two Russians were killed.

Russian Interior Minister Rashid Nurgaliyev, visiting Chechnya's North Caucasus province of Dagestan, said the situation in Stavropol was nothing out of the ordinary.

"The situation is under control and it won't be developing according to the Kondopoga scenario," he told Russian agencies