Just a few hours after the US army apologized for killing Afghan civilians in March, a NATO strike claimed the lives of scores of more civilians in the southern province of Helmand. 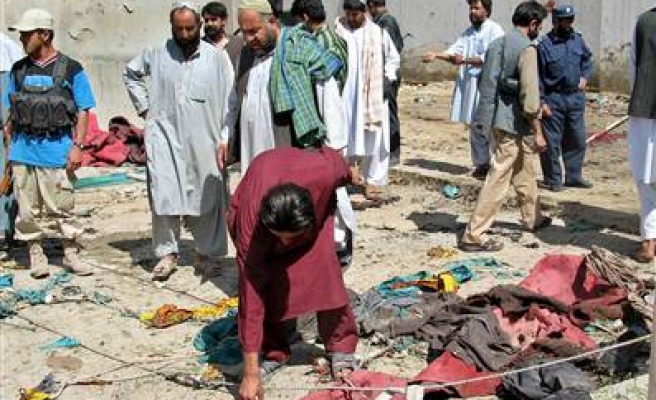 Just a few hours after the US army apologized for killing Afghan civilians in March, a NATO strike claimed the lives of scores of more civilians in the southern province of Helmand.

"Twenty-one civilians, including women and children, were killed," Assadullah Wafa, the provincial governor, told Agence France-Presse (AFP) on Wednesday, May 9.

But witnesses said that between 40 and 60 civilians were killed in the attack, according to the correspondent of the Doha-based Al-Jazeera.

He had dispatched a delegation to the area to find out what had happened.

It was not clear if the strike was by NATO's International Security Assistance Force or the separate US forces, which both operate in the south.

There has been a steady rise in the killing of Afghan civilians, including children, who are also shot dead at checkpoints manned by foreign forces.

Last week, at least 49 civilians were killed in attacks by foreign troops in the Zerkoh Valley, about 120 kilometers south of Herat city.

Hours before the latest strike, a US brigade commander said he was "deeply ashamed" over the civilian killings in March.

"We are filled with grief and sadness at the death of any Afghan. But the death and wounding of innocent Afghans at the hand of Americans is a stain on our honor and on the memory of the many Americans who have died defending Afghanistan and the Afghan people."

At least 19 Afghan family members were killed and 50 people injured in March when US forces opened fire at civilians in the Nangarhar province after a roadside bomb attack.

"This was a terrible, terrible mistake, and my nation grieves with you for your loss and suffering. We humbly ask for your respect and forgiveness," Nicholson said.

The marine unit involved in the incident was taken out of Afghanistan two weeks after the attack.

Nicholson said he made 2,000 dollar payments on Tuesday to the family of the victims.

"The people are our center of gravity here, so first and foremost in all that we do we seek to do no harm to the people.

"So events such as that do set us back with the population, and they have to be addressed very directly and forthrightly with the Afghan people."

Analysts have warned that the indiscriminate killing of civilians is turning ordinary Afghans against foreign troops and eroding fragile public support for President Hamid Karzai's government.

Resentment has also been simmering over the aggressive practices of the trigger-happy foreign troops in bullet-proofed convoys who regularly force traffic off the roads.

They also burst into homes in the middle of the night to conduct searches despite repeated calls for respect of Afghan sensibilities.
Last Mod: 09 Mayıs 2007, 15:39
Add Comment