Talks between NATO's top generals and their Russian counterpart failed Thursday to narrow the gap between Moscow and the West over missile defense and arms control in Europe. 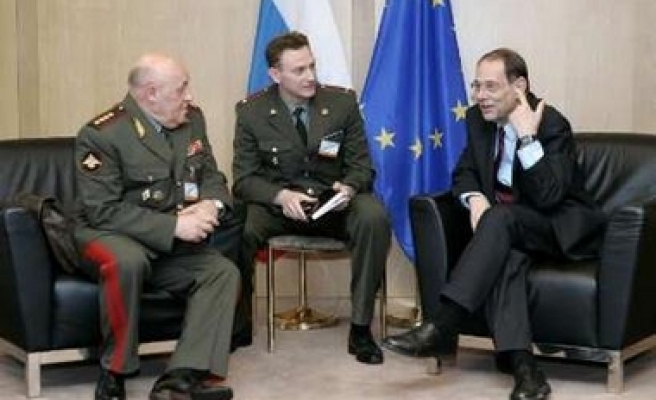 Talks between NATO's top generals and their Russian counterpart failed Thursday to narrow the gap between Moscow and the West over missile defense and arms control in Europe.

The Russian military's chief of general staff warned that the treaty regulating conventional arms in Europe was "on the verge of collapse" following President
Vladimir Putin announcement of a moratorium on Russia's participation last month.

After talks at NATO headquarters, Gen. Yuri Baluyevsky repeated Russia's opposition to American plans to install anti-missile defenses in Europe and dismissed U.S. assertions that the interceptors were needed to defend against potential threats from
Iran.

He told reporters Iran was decades away from producing missiles that could target Europe and claimed the U.S. plans posed a threat to Russia.

Iran "cannot be the reason for the deployment of the U.S. strategic elements," Baluyevsky said. "What is being created is exactly what we moved away from 15 years ago with the end of the Cold War."

U.S. officials have said the plan to install 10 interceptor missiles in Poland and a radar station in the Czech Republic poses no threat to Russia's strategic weapons. Baluyevsky said, however, that Russia could not be sure the U.S. deployment would remain on that scale.

He blamed NATO nations for the crisis over Putin's announcement that Russia would no longer apply the revised Conventional Forces in Europe treaty. NATO nations have long refused to ratify the treaty because of complaints that Russia has failed to respect a commitment to pull its troops out of Moldova and Georgia.

Baluyevsky said the U.S. and its allies had fallen for Iranian scare tactics about the Islamic regime's progress in developing long-range missile potential.

"We are speaking about theoretical developments on paper," he said. "Those developments are mostly used for propaganda."

Despite the disputes, Baluyevsky and NATO's top solider, Gen. Ray Henault, said the two sides had made progress on a range of military cooperation projects, including joint exercises, counterterrorism and battlefield defenses against short-range missiles. Last Mod: 11 Mayıs 2007, 16:03
Add Comment