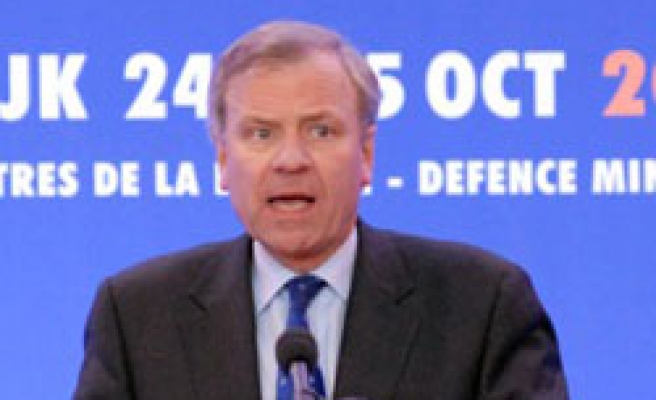 NATO member Turkey has for years not allowed military cooperation between the alliance and the EU, saying NATO intelligence cannot be shared with non-NATO EU countries including Greek Cyprus.

With the EU now involved in police training alongside NATO in Kosovo and Afghanistan, the standoff has held back efforts by the two to coordinate transport, force protection and other tasks there.

"We cannot allow this to go on as our soldiers are engaged side by side in dangerous missions," de Hoop Scheffer told a defence conference organised by France, the current holder of the rotating French presidency.

De Hoop Scheffer cited one problem as Turkey's exclusion from the European Defence Agency (EDA), the body created to foster cooperation between the EU's defence industries, calling for a "real effort to change the situation".

"I have made an appeal to bring Turkey into the EDA," he said to reporters later. "In NATO we are looking at how we treat non-NATO members and let us see if there are possibilities in the EU of doing the same."

Turkey, which began EU membership talks in October 2005, has accused the EU of going back on promises to grant it associate membership of the EDA. Diplomats say such a step has always been blocked in the past by Cyprus.

De Hoop Scheffer's call is the most direct yet on the EU to seek to overturn Greek Cyprus' veto, but diplomats say any such shift would likely have to await progress in delicate diplomacy aimed at reunifying the Greek and Turkish parts of Cyprus.

Commanders of NATO's 50,000-plus force in Afghanistan have had to conclude a series of ad hoc operational pacts with the small EU police training mission there, and NATO officials say the alliance will do the same in Kosovo if the standoff is not resolved.

While such informal pacts at least allow the two organisations to work together on the ground, they are seen as far from ideal. Military sources say they leave unanswered issues such as notably which body bears legal responsibility in any joint operation.

The party dismisses the charges as politically motivated and points to its pro-business, pro-reform record in office.

On Sunday, two former Turkish generals were arrested on charges of forming and leading a terrorist group and seeking to overthrow the government.

A court ordered the arrest of Sener Eruygur, once head of the paramilitary gendarmerie, and Hursit Tolon, the former first army commander. They were sent to a prison in Istanbul.

They were among 21 people detained last Tuesday in a police investigation into allegations of a coup. Eight of the detained including a prominent businessman had already been arrested.

Media reports said a secret plan was seized during the swoop which called for illegal protests on July 7 across 40 provinces, assassinations and attacks on security forces.