Like their human counterparts, baby wild animals learn their life lessons from their mother and father. 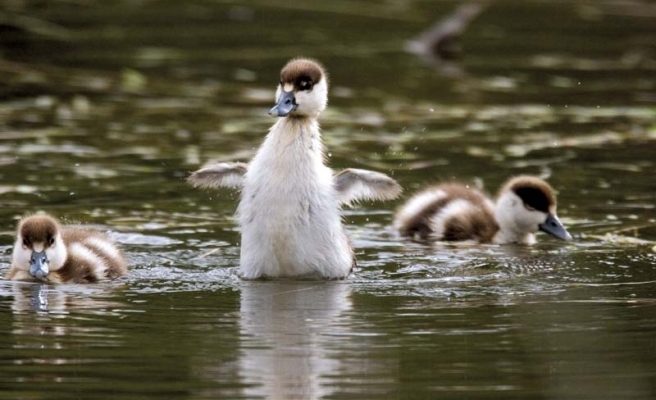 It was so small it would have fit easily into the palm of my hand. Looking all around, its big eyes open wide. Its body speckled with white spots, its nose wet. Its legs no thicker than my little finger. Hesitantly, I extended my hand and gently touched and caressed it. I felt its paper-thin ears.

Villagers poking around the forests of Artvin had found this baby deer in 1995 and taken it home. Later they had tried to sell it to a tourist. When we saw them, the authorities were seizing the fawn and taking it under protection. It was my first time to see a baby wild animal.

My fascination with wild life had drawn me to the Küre Mountains. For weeks I had roamed the forests of Cide in Kastamonu in hopes of spotting a deer. I knew that mother deer give birth to their young in the brush and then keep a distance from their infants so as to throw wolves and other prey off their scent. Easily camouflaged by its white spots, the fawn crawls under a bush where it lies still, emitting sounds to communicate with its mother.

A squeal for example means “I’m hungry!” Vedat Beşkardeşler, a research assistant at the Istanbul University School of Forestry, had explained all these things to us. Finally, after extensive efforts, I found an opportunity to observe a mother with one baby. How shy they were. Like all herbivores, whose place in the food chain is to chew grass and turn it into meat, they would spend their lives fleeing from carnivores like wolves and lynxes. Such was the world this baby deer had just come into.

We had observed them from makeshift shelters in May of 2006 while I was working on the documentary, ‘Children of the Steppe: The Anatolian Wild Sheep’, a joint effort of the Turkish State Radio and Television (TRT) and the Department of National Parks (DKMP). Although we had kept an eye on the entire birthing area, we had never actually witnessed a birth. When her time approaches, the female leaves the herd and gives birth either in a dry river bed or in the shade of a rock.

A newborn lamb is able to run at its mother’s side from birth. Within a few days the environs were crawling with them. All yellow in color because the steppe itself is going to turn yellow with the first warm weather. The babies are born knowing how to nurse and how to walk. Only later however do they learn what to eat and what not to eat and how to distinguish friend from foe.

Once I hid before dawn in a rock hollow at a spot where Anatolian sheep were in the habit of passing with their young. The sun had already risen slightly when the group arrived. They advanced slowly, grazing as they went.

The young would stray some 10-15 meters from their mothers, then come back to rest in their shade. One lamb that had wandered away from its mother noticed me in my hiding place. Eyeing me curiously, it approached a little closer. The mother, realizing what was happening, bleated a few times. But the lamb was oblivious, so the mother trotted over to retrieve it.

Today’s lesson, “Humans are dangerous.” “They have to learn all the lessons,” explained park manager Ece Soydam that evening. “Otherwise they’ll be devoured!”

AFTERNOON OF A LOST FAWN

A shepherd in Seben township of Bolu province once brought home a fawn he’d found in the forest, assuming it had lost its mother. But the mother deer was around somewhere and the incident was eventually reported to the Department of National Forests.

We asked Ozgun Emre, Coordinator of Mammal Research for the Nature Society, about it and here’s what he said: “If the baby is left where it is, it has a chance of finding its mother. The mother would surely have been looking for her baby. Only three or four days had passed so we left it where it had been found, in the wild.”

Similar incidents occur in the steppes of Urfa in southern Turkey.

Problems such as shrinking habitat, illegal hunting and trapping of young combine to threaten the existence of numerous species in Turkey. But numbers are on the rise now in the last few groups still left in the wild, as a result of protection efforts by the Urfa Department of National Parks. The Urfa steppe is about to burst with baby gazelles thanks to reinforcements from the Ceylanpınar breeding farm introduced in 2006.

A BABY BLACK VULTURE WAITS FOR HIS PARENTS

The mother and father had flown off in search of food and not returned for three days. The baby, in a nest we’d seen while making another joint TRT - DKMP documentary, ‘Giant Wings: The Black Vulture’, took everything he saw flying through the sky for his parents, puffing up his feathers and spreading his wings in an expression of joyful anticipation. Each time, realizing it wasn’t them, he’d quiet down and start watching again. He was still alive and kicking but he must have been ravenous.

Then suddenly the forest rang with the shrieks of the hungry baby which had spotted its parents swooping into view over the hill. When they alighted in the nest he pecked impatiently at their wings, all the while emitting urgent cries. Regurgitating the food from their maws directly into the mouth of their young one, they appeased his hunger only to fly off again in search of more food. Their job was not easy since deer, gazelles and rabbits are on the decline in these mountains, and vultures feed instead on carcasses of wild boar and waste from city garbage dumps.

Despite wandering for months deep in the forests of Cide in Kastamonu province only once did I encounter a bear. Shying away from me, it beat a hasty retreat. Meeting up with new mothers and their cubs might have been a little dodgy in any case.

But we found the solution. We made a little noise as we advanced, giving the mother bear and her cub plenty of time to make themselves scarce. Going into hibernation some time in November, a mother bear gives birth to her young during this winter slumber, emerging together with her babies in spring when the training period that will last

2-3 years commences. At the end of this period, the young bears, frightened off by the males come to mate with their mother, strike out on their own.

As for wolves, as Ö. Emre Can, with whom I once made observations in Konya, told me: “Female wolves give birth to their young either in caves or holes in the ground and don’t bring them out for

8-10 weeks. For the first three weeks even the mothers don’t leave the lair. It takes two or three years for the babies to learn the tricks of hunting with the pack.”

Day has dawned on the steppe and the mist is burning off. Two yearling-plus wolf brothers that we watched for close to half an hour have disappeared over the hill in response to a muffled howl out of the depths.

Remembering that my wife had opened the window and called in the direction of the garden, I turned to my daughter: “Come on, Elif. It’s very late. Time to go home.”