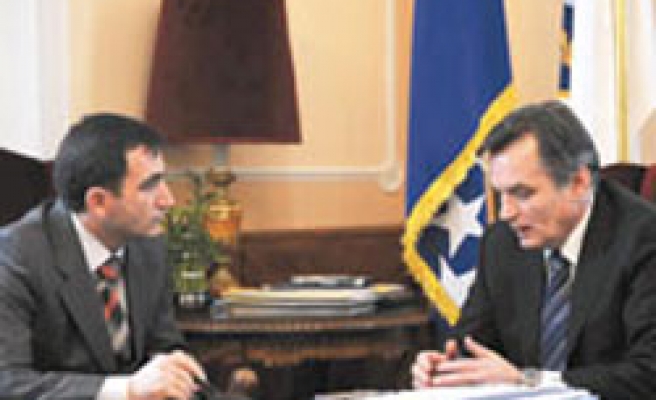 Haris Silajdzic, the new chairman of Bosnia and Herzegovina's tripartite state presidency, praised relations between his country and Turkey, saying he was looking forward to meeting with Prime Minister Recep Tayyip Erdoğan during a visit later this month.

New Bosnian leader Haris Silajdzic -- who on Thursday replaced his Croat colleague Zeljko Komsic in Sarajevo as the presidency's chairman -- spoke to media only hours after he took over the post.

Bosnian Muslim Silajdzic became the new chairman of the country's top body in a regular rotation procedure between the representatives of Bosnia's three ethnic groups -- Croats, Muslims (Bosniaks) and Serbs. He is to chair the presidency for the next eight months, after which the Serb member of the presidency, Nebojsa Radmanovic, will take over.

Silajdzic said Erdoğan was expected to visit Sarajevo on March 24-25. Commenting on the state of bilateral relations between Turkey and Bosnia and Herzegovina, he said the relations were "perfect" but emphasized more could be done to improve economic ties.
"We are not ready for intense economic relations yet, because we have an economy devastated by war," he said, adding: "Our economy is getting ready for such relations. Foreigners can come and invest here. We have liberal regulations for foreign investments."

The Bosnian president also praised Turkish schools operating in Bosnia and Herzegovina, saying they positively affect relations, while adding that his country needs contributions in the field of education. "There are many people of Bosnian origin living in Turkey, and our relations keep getting better. Of course we also need cultural exchange along with all these ties," he said.

The Bosnian Serb parliament said on Feb. 21 that their entity should follow suit if a significant part of the United Nations and most EU countries recognize Kosovo's independence, a concept rejected by Western countries.

"There is no legal basis for such a referendum. It's legally impossible, and there would be no legal implications even if there is such a referendum," Silajdzic said. He also revealed that his country is unlikely to recognize Kosovo's independence any time soon due to strong objections from its own Serbian community.

Bosnian Serbs, who account for 31 percent of Bosnia's 3.8 million, feel their entity should follow Kosovo's lead and be allowed to secede from Bosnia and eventually attach itself to Serbia, which they see as their "motherland." The 1995 Dayton Peace Accord, which ended a 1992-95 war that pitted Serbs against Croats and Muslims, divided Bosnia into two ethnically based autonomous regions, the Muslim-Croat federation and the Serb Republic. The two entities share weak central institutions, while each has its own government, parliament and police.