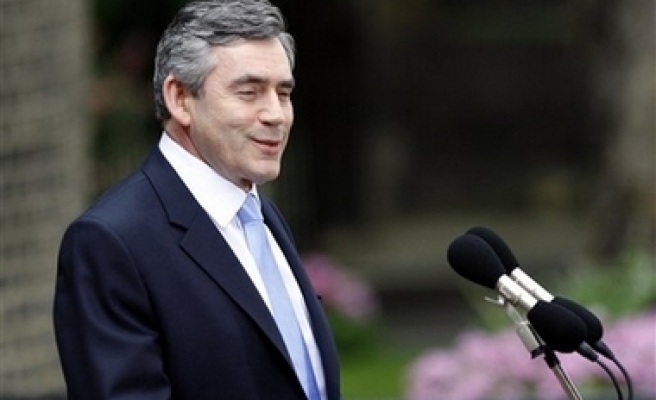 Britain's new leader Gordon Brown was appointing his senior circle of ministers Thursday after he ended a decade-long wait to become prime minister, stepping from Tony Blair's shadow determined to repair divisions over the unpopular Iraq war.
Brown, a 56-year-old Scot, planned a host of changes from Blair's final team, bringing a crop of young legislators into his government.

He also was looking beyond his Labour ranks — much like French President Nicolas Sarkozy — to offer roles to opposition legislators and leading business figures.

"I will build a government that uses all the talents," Brown told reporters outside his Downing Street office. "I will invite men and women of good will to contribute their energies in a new spirit of public service."

Britain changed its leadership for the first time in a decade with Queen Elizabeth II's formal confirmation of Brown as leader on Wednesday.

Britain also will have a new Treasury chief for the first time since 1997. Another Scot is widely tipped for the role — Alistair Darling, the current trade and industry secretary.

Current Foreign Secretary Margaret Beckett was widely expected to be moved from her post as chief diplomat. A leading contender to replace Beckett is David Miliband, the current environment chief.

Health Secretary Patricia Hewitt also resigned, but there was little speculation about a likely choice for her job.

Brown's spokesman Michael Ellam declined to comment in advance of a full announcement.

Having departed the Treasury for Buckingham Palace in a modest sedan with wife Sarah, Brown swept back to Downing Street in a sleek prime ministerial limousine.

"I remember words that have stayed with me since my childhood and which matter a great deal today — my school motto — 'I will try my utmost'," Brown told reporters.

President Bush was the first world leader to offer his congratulations in a phone call soon after Brown's appointment, Downing Street said.

Their 10-minute talk was "cordial and constructive," Ellam said, declining to specify if the leaders discussed Iraq.

In London, Brown continued discussions map out his legislative agenda seeking to head off the challenge from a revived opposition Conservative party. Polls already point to a "Brown bounce," with one survey putting his Labour party ahead of its rivals for the first time since October.

Most closely watched will be Brown's policy toward Iraq. British troop numbers there have rapidly fallen during 2007.

Blair left his successor an option to call back more of the remaining 5,500 personnel by 2008 — an opportunity likely to be grasped by a leader with a national election to call before June 2010. Brown confirmed Wednesday the number soon will fall to 5,000.

The succession of Brown ended a partnership at the pinnacle of British politics that began when he and Blair were elected to Parliament in 1983 — sharing an office and a vision to transform their party's fortunes. Last Mod: 28 Haziran 2007, 13:38
Add Comment