Discovered in a cave in Oregon, DNA testing shows fossil from more than 14,000 years ago related to people living in Siberia and East Asia. 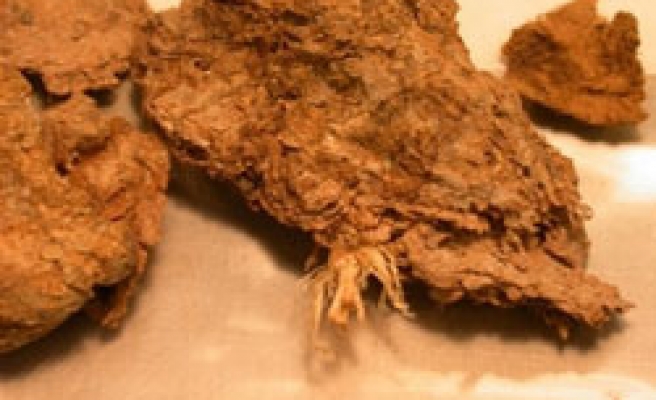 New evidence shows humans lived in North America more than 14,000 years ago, 1,000 years earlier than had previously been known.

Discovered in a cave in Oregon, fossil feces yielded DNA indicating these early residents were related to people living in Siberia and East Asia, according to a report in Thursday's online edition of the journal Science.

"This is the first time we have been able to get dates that are undeniably human, and they are 1,000 years before Clovis," said Dennis L. Jenkins, a University of Oregon archaeologist, referring to the Clovis culture, well known for its unique spear-points that have been studied previously.

Humans are widely believed to have arrived in North America from Asia over a land-bridge between Alaska and Siberia during a warmer period. A variety of dates has been proposed and some are in dispute.

Few artifacts were found in the cave, leading Jenkins to speculate that these people stayed there only a few days at a time before moving on, perhaps following game animals or looking for other food.

While the analysis is not yet complete, he said there are bones of squirrels, bison hair, fish scales, protein from birds and dogs and the remains of plants such as grass and sunflowers.

The oldest of several coprolites studied is 14,340 calendar years old, said co-author Eske Willerslev, director of the Centre for Ancient Genetics at Denmark's University of Copenhagen.

"The Paisley Cave material represents, to the best of my knowledge, the oldest human DNA obtained from the Americas," he said. "Other pre-Clovis sites have been claimed, but no human DNA has been obtained."

The date for the new coprolites is similar to that of Monte Verde in southern Chile, where human artifacts have been discovered, added Willerslev.

Jenkins said it isn't clear exactly who these people living in the Oregon caves were, since there were few artifacts found. He said there was one stone tool, a hand tool used perhaps to polish or grind or mash bones or fat.

'THEY MOST LIKELY CAME FROM SIBERIA'

"We are not saying that these people were of a particular ethnic group. At this point, we know they most likely came from Siberia or Eastern Asia, and we know something about what they were eating, which is something we can learn from coprolites. We're talking about human signature," he said.

"If you are looking for the first people in North America, you are going to have to step back more than 1,000 years beyond Clovis to find them," Jenkins said.

The Clovis culture has been dated to between 13,200 and 12,900 calendar years ago and is best known by the tools left behind.

Michael Waters, director of the Center for the Study of the First Americans at Texas A&M University, said the find, along with indications of human presence at other locations, adds to the evidence for a pre-Clovis human presence in North America.

"The genetic evidence from the coprolites from Paisley Caves is also consistent with the current genetic data for the peopling of the Americas — that the earliest inhabitants of the Americas came from Northeast Asia," added Waters, who was not part of the research team.

Anthropologist Ripan Malhi of the University of Illinois, Urbana-Champaign, said this data along with material from Alaska provide increasing "evidence that ancestors of Native Americans used a coastal route during the colonization of the Americas." Malhi was not part of the research team.

Jenkins said that discoveries like those in the Oregon caves "help us to reconstruct the American past."

"Our heritage is really important and it is important to the majority of the American public. If you don't know where you come from, it's hard to have a feeling of community, of participation."

To make sure the Oregon cave material hadn't been contaminated with modern DNA, the researchers tested more than 50 people who worked at the site. The DNA testing indicated that the feces belonged to Native Americans in two groups that can be traced to Siberia and East Asia.

The research was funded by the Museum of Natural and Cultural History, University of Oregon; Association of Oregon Archaeologists and the Marie Curie Actions program.