New movement against coups in Turkey 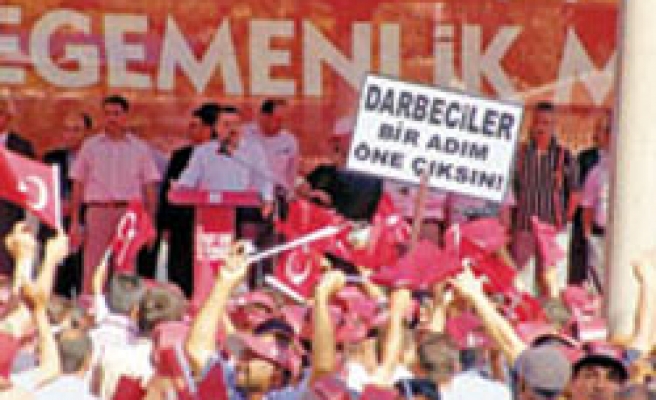 The Common Sense Movement, a platform bringing together civil societies, opinion leaders, journalists, academics, writers and politicians from different segments of society, held its first meeting opposing coup attempts and anti-democratic practices in Turkey in the eastern province of Malatya on Saturday.

Tens of thousands gathered to advocate democracy, rule of law and national sovereignty at the meeting, planned in cooperation with NGOs including the Young Civilians, the Association of Turkish Voluntary Enterprises (TGTV), the Civil Servants' Trade Union (Memur-Sen), the Confederation of Turkish Real Trade Unions (Hak-İş) and the Association of Human Rights and Solidarity for Opp-ressed Peoples (MAZLUM-DER).

Meeting participants, numbering around 50,000, slammed recent military coup attempts perpetrated through several institutions that have resorted to anti-democratic practices, carrying banners that read, "We have set off with Common Sense, we will not take breaks in our path toward democracy"; "Sovereignty belongs neither to the judiciary nor to coups; it belongs unconditionally to the people"; "Say 'stop' to coups"; and "No to coups for full justice." The meeting was held peacefully under tight security.

Memur-Sen President Ahmet Gündoğdu, who delivered a speech at the meeting, said the nation should have the final say on its future. "There are some circles in Turkey who say they will govern the country no matter who is in power. We, as the nation, say 'no' to such anti-democratic initiatives. We will not consent to a democracy crisis and coup attempts. We are here today to say that sovereignty belongs to the people. Turkey is a democratic and secular country governed by the rule of law. No single person is superior to another," he said.

Hak-İş President Salim Uslu said the single thing Turkey did not need was tension. "Our people should be in peace and solidarity. Turkey was in dire straits during the presidential elections. We are here today as democracy is being threatened and despised. Familiar scenarios are currently being restaged. There are some who are forcing the boundaries of the Constitution. They wish to straighten out journalists, politicians and the nation. There are attempts to replace rule of law and democratic values with a regime of judges. And the country is heading in a direction incompatible with democracy. We shouldn't still [have to] be calling for democracy and freedoms in this era," he remarked.

Yıldıray Oğur, on the other hand, who spoke on behalf of the Young Civilians, a group known for its use of sarcasm in its protests, noted the nation had so far remained silent in the face of coups and anti-democratic practices. "This meeting is an indication that the nation has finally broken its silence," he said.

The Common Sense Movement will continue its string of meetings in the days ahead, with gatherings planned in different cities across the country. Saturday's meeting came only one week after a similar gathering in İstanbul, where thousands rallied in protest of recent coup attempts.