Pakistan's new prime minister is set to be sworn in by President Pervez Musharraf Tuesday. 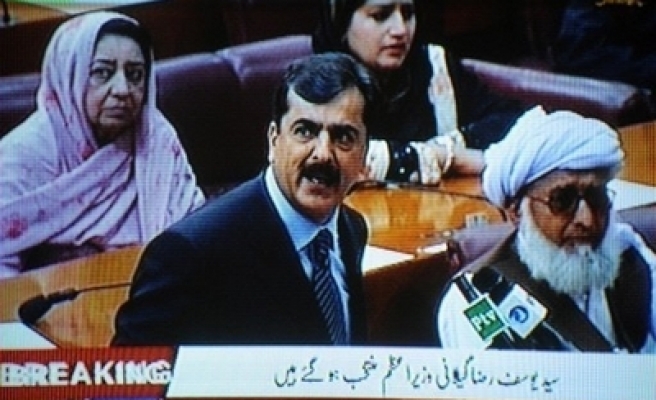 Pakistan's new prime minister is set to be sworn in by President Pervez Musharraf Tuesday, a day after challenging the US-backed leader's authority by freeing judges detained under emergency rule.

Yousuf Raza Gilani, a senior member of the party of slain opposition Benazir Bhutto, was elected as premier on Monday by the lower house of parliament where an anti-Musharraf coalition now holds sway.

Minutes later Gilani ordered the release of deposed chief justice Iftikhar Muhammad Chaudhry and other judges, who have been held since Musharraf sacked them in November amid fears they could weaken his grip on power.

Gilani himself spent five years in jail under Musharraf's government from 2001 to 2006, yet on Tuesday he will find himself taking the oath as prime minister from the former military strongman.

'President Pervez Musharraf will administer the oath of prime minister to Mr Yousuf Raza Gilani on Tuesday,' a senior government official said. The ceremony is due to start at 11:00 am (0600 GMT).

Top judge Chaudhry will meanwhile be enjoying his first full day of freedom on Tuesday, after finally emerging from four months of house arrest the previous night to wave to ecstatic supporters.

The former chief justice will be meeting senior lawyers and wellwishers at his residence, his aides said, with media reports speculating that he could also try to visit the Supreme Court.

Pakistanis will now be watching to see how strongly the coalition government that won elections in February confronts Musharraf.

The coalition, led by Bhutto's Pakistan People's Party and including the party of former premier Nawaz Sharif and two smaller groupings, has vowed within 30 days to pass legislation reinstating the sacked judges.

Musharraf imposed a state of emergency on November 3 and sacked some 60 judges when it looked like the Supreme Court might overturn his October re-election as president.

But his position has been badly weakened by the heavy losses suffered by his allies in last month's polls, coupled with plummeting popularity and economic problems including growing power cuts.