The new Palestinian "PM" delivered a warning to hundreds of imams, including Hamas supporters, saying he won't tolerate "political speech" delivered from mosque pulpits and plans to collect fighter's weapons. 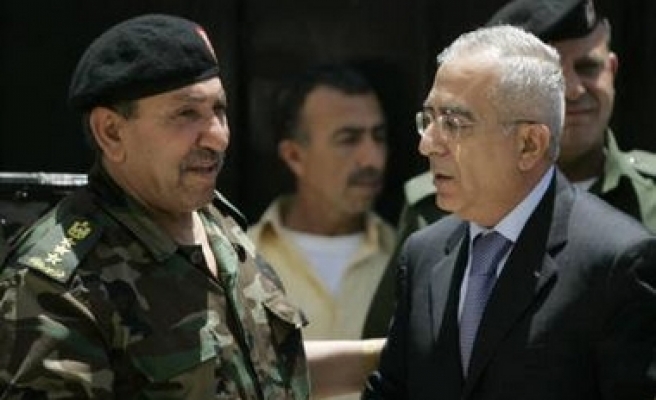 Salam Fayyad's meeting with some 800 Muslim clergy marked the latest attempt to stem the influence of Hamas in the West Bank following the takeover of Gaza this month.

Security forces have arrested dozens of Hamas activists in the West Bank, and President Mahmoud Abbas is trying to prevent funding to Hamas with a review of all private organizations.

But Fayyad's crackdown on Hamas was complicated by Israel's fighting against Abbas' Fatah movement in the West Bank city of Nablus.

"We view this aggression as a way to undermine our efforts to provide security and end the chaos," Fayyad said.

Five Israeli soldiers were wounded by bombs as they moved from home to home through the densely populated Old City. Tens of thousands of residents were confined to their homes by a curfew.

Overnight in Nablus, Israeli soldiers killed a Palestinian fighter, both the army and the dead fighter's group said Friday.

The Al Aqsa Martyrs' Brigades, whose members are loyal to Palestinian President Mahmoud Abbas, claimed the man as a member.

In his meeting with clergymen Thursday, Fayyad was accompanied by Abbas' top security official, Interior Minister Abdel Razak Yehiyeh. "We will collect weapons and replace them with pens and books," the minister told the crowd. "The phenomenon of fighters is very dangerous, and we want to stop it in all forms."

Fayyad told the preachers to take politics out of their sermons. "We won't allow them (mosques) to be turned into places of incitement and intimidation," he said.

Hamas influential in many mosques

Hamas is influential in many mosques in the West Bank and Gaza, and has been using Friday sermons as a vehicle for spreading its message. Preachers have also been actively involved in politics.

In Nablus, seven of eight Hamas members of parliament are preachers, said Suhair al-Dubai, a clergyman from the city.

"The government has realized how important the mosques are in forming and leading public opinion," said al-Dubai, who attended the meeting with Fayyad.

"But Hamas is very well organized in mosques ... The government can restrict them, but not eliminate them because they are part of a structure and can always find a way to play a political role.

Mohammed Abu al-Hasan, a Hamas preacher from the West Bank town of Jenin, said clerics would continue to speak their minds, regardless of any government directive.

"We will not accept these restrictions and we are going to respond with our own message in this Friday's sermons," he said. "Fayad is a politician, he can handle political issues and we...can handle religious issues." Last Mod: 29 Haziran 2007, 10:09
Add Comment