The maps could also help countries adapt to global warming by aiding understanding of groundwater trapped in rocks, a major source of water for drinking and irrigation. 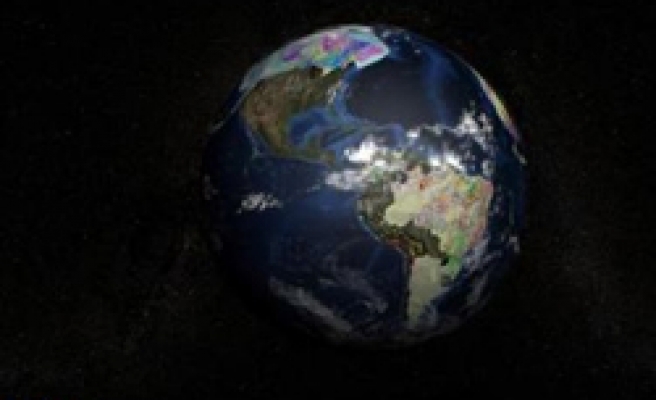 Scientists unveiled the first digital map of the earth's geology on Wednesday and said it could guide oil and gas exploration and mining or pinpoint sites for burying greenhouse gases.

The map shows the world stripped of vegetation, water, soil and human structures by joining up existing data from the geological centres of 83 member nations in a planetary jigsaw on the Internet (www.onegeology.org).
"We have simply unlocked what already exists," said Ian Jackson, chief of operations at the British Geological Survey who is coordinator of the map that he said could be of interest to the public as well as many companies.

"The rocks beneath your feet have a powerful impact on resources, minerals, where your energy comes from, the hazards that you face and, last but not least, climate change," he said at the launch at an international geological congress in Norway.

Uses could be to identify areas suitable for mining, oil and gas exploration or areas at risk from landslides or earthquakes. It could help understanding of formations which store groundwater for drinking or irrigation.

It could also help locate porous rocks suitable for burying emissions of greenhouse gases, mainly from burning fossil fuels in power plants or factories. The U.N. Climate Panel says such burial could be a main way to slow global warming this century.

But there are problems with burying greenhouse gases, led by risks of leaks. "You will have to understand the geology, especially if you are going to do it near a border, such as the United States or Canada," Jackson told Reuters.

The mapping project so far covers about 70 percent of the globe -- gaps include India and parts of Africa. Britain and France have contributed a total of 600,000 euros ($930,100) to the project. All countries provided their data for free.

Jackson said the maps could help mineral-rich developing nations, such as Sierra Leone or Afghanistan, win foreign investments. Strong economic growth in developing economies such as China is boosting demand for many raw materials.

The maps could also help countries adapt to global warming by aiding understanding of groundwater trapped in rocks, a major source of water for drinking and irrigation.

Clay beneath London, for instance, swells and shrinks according to rainfall, causing subsidence to buildings that costs insurers 300 million pounds ($590 million) a year. Shifts in rains linked to climate change could aggravate losses.

In many countries, maps are used to safeguard groundwater, for instance by identifying whether rock formations would let a toxic spill from a nearby factory seep into drinking water.

"In the United States the principal application of geological mapping is groundwater protection. People need to see underground so they can protect their drinking water," said Harvey Thorleifson of the Minnesota Geological Survey.