Turkish political life witnessed an unprecedented row as the military and opposition parties confronted each other in battle of words. 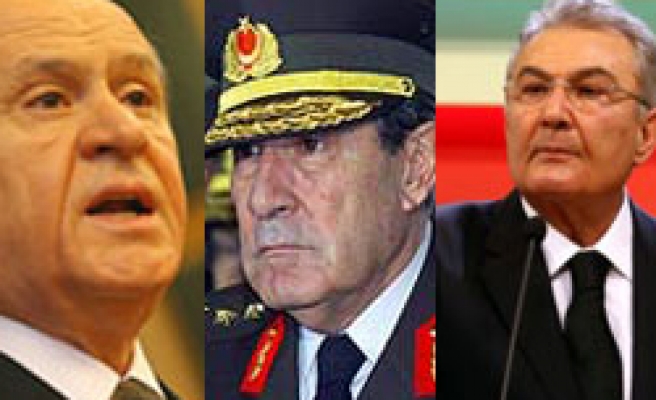 Turkish political life witnessed an unprecedented row yesterday as the military and opposition parties confronted each other in battle of words.

"The Turkish military considers rhetoric targeting it an unjust and lowly attack against an institution that fights terrorists and loses martyrs in the name of the country," the General Staff said in a statement late Tuesday.

The CHP and the MHP raised the question of American influence on the military's decision to pull out from northern Iraq and claimed that the operation was terminated prematurely.

Chief of Staff Gen. Yaşar Büyükanıt challenged opposition leaders to prove their claims. "I will take off my uniform if they prove it," Turkey's top general said.

Deniz Baykal, the CHP leader, lamented the end of the operation which he said he was informed of through a declaration by Iraqi Foreign Minister Hoshyar Zebari.

"It is my duty to interrogate this. I have my signature under the motion that gave the military the mandate for that operation. I do not believe the Turkish army is incapable of carrying the operation beyond eight days," Baykal said.

Leader of the MHP, Devlet Bahçeli, joined him and argued that the report of the General Staff on the outcome of the operations was susceptible of giving a warring party status to the PKK. "These declarations may give the PKK undeserved prestige and image," Bahçeli said.

The General Staff said: "The Turkish military faces these kinds of meaningless accusations for the first time in its 24-year-long fight against terrorism despite its reluctance to enter a polemic with political figures," dealing a serious blow to the leaders of the two parties who remained unsatisfied with the outcome of the land operation against the PKK.

"These attacks damage the military's resolve to fight terrorists more than traitors do," the statement read. This is the first time that the military ever found itself in a row with opposition parties and its first accusation of "treason."

The CHP tried to elude the impact of the military's declaration with the first reaction coming from party's deputy chief, Onur Öymen. "We do not take offense from the statement. Our words had no content that could hurt the military. We do not want a polemic with the military. The responsibility and the authority of operations falls on the government. No one has ever condemned the CHP so lowly thus far. Therefore, the target of the declaration cannot be CHP," Öymen said.

CHP's official response came yesterday on its Web site, claiming that the military was not right in its arguments. "You cannot prove your position by insults... insult is evidence of it being wrong. We are closely watching the 'general scene,'" the CHP said. "General scene" is a reference to Turkey's founder Mustafa Kemal Atatürk's historic six days of address to Parliament in 1927 on the preparation and aftermath of the Independence War which he begins by describing the general scene when Ottoman land was under foreign occupation.

CHP also stressed that it was in a democratic discussion and that they directed their criticism to the prime minister. "No one can take onto themselves to intervene. It is not only the politicians who should keep the military out of polemics," the CHP said.

'It is not your business,' MHP tells the military

MHP slammed the military over its accusations of treason and urged it to steer clear of debates. "What ever their duty is, no one may see the right to depict the MHP as an organization giving its country more harm than traitors," the MHP said in a statement, urging the military to stay within the borders of its duties and responsibilities. The MHP reiterated its position on what it considers to be a premature end to the land strikes into northern Iraq.

Government spokesman and deputy prime minister, Cemil Çiçek, said that what bothers the opposition the most was the harmony between the government and the military.

"We showed perfect cooperation during the operation. We need to end these debates, as the operations did not come to an end. Similar military action may be repeated," Çiçek said.

Baykal's outrage at the military stems from his reaction to the closer relations government-military.