New scans show evidence of water on the moon

Tiny green and orange glass balls brought back from the moon nearly 40 years ago by astronauts show evidence that water existed there from the very beginning, scientists reported on Wednesday. 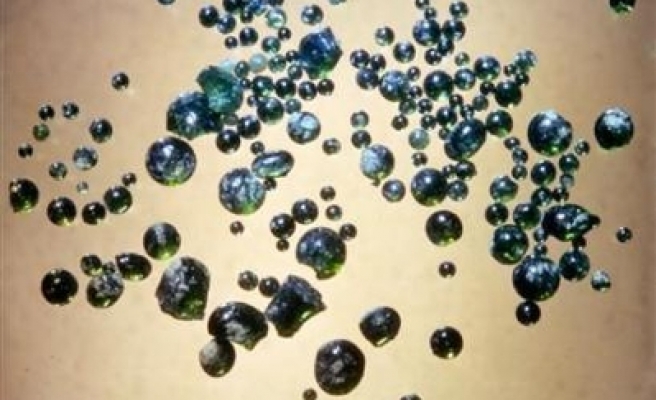 They used a new method of analyzing elements in the lunar sand samples to show strong evidence of water, dating back 3 billion years.

Their study, published in the journal Nature, could support evidence that water persists in shadowed craters on the moon's surface -- and that the water could be native to the moon and not carried there by comets.

Most scientists believe the moon was formed when a Mars-size body collided with Earth 4.5 billion years ago.

The giant impact would have melted both proto-planets and sent molten debris into orbit around the Earth.

Some of this would have eventually coalesced into the moon, but the heat of the impact would have vaporized light elements such as the hydrogen and oxygen needed to make water -- theoretically, anyway.

Erik Hauri of the Carnegie Institution for Science in Washington had developed a technique called secondary ion mass spectrometry or SIMS, which could detect minute amounts of elements in samples. His team was using it to find evidence of water in the Earth's molten mantle.

"Then one day I said, 'Look, why don't we go and try it on the moon glass?'" Alberto Saal of Brown University, who helped lead the study, said in a telephone interview.

"It took us three years to convince NASA to fund us."

The space agency was also loath to part with any of the precious samples brought back by astronauts during the Apollo missions in the 1970s.

Saal, Hauri and colleagues were able to get about 40 of the little glass beads and break them apart for analysis.

What they found overturned the conventional wisdom that the moon is dry.

"For 40 years people have tried (to find evidence of water) and were not successful," Saal said.

"Common sense tell us there is nothing."

Saal's team did not find water directly, but they did measure hydrogen, and it resembled the measurements they have done to detect hydrogen, and eventually water, in samples from Earth's mantle.

The evidence shows that the hydrogen in the sample vaporized during volcanic activity that would be similar to lava spurts seen on Earth today.

"We looked at many factors over a wide range of cooling rates that would affect all the volatiles simultaneously and came up with the right mix," said James Van Orman, a former Carnegie researcher now at Case Western Reserve University.

"It suggests the intriguing possibility that the moon's interior might have had as much water as the Earth's upper mantle," Hauri said in a statement.

"But even more intriguing -- if the moon's volcanoes released 95 percent of their water, where did all that water go?"

Some might still remain at the poles, frozen in the shadows of craters, he speculated. Several lunar missions have found just such evidence.

"If parts of the lunar mantle contain as much water as Earth's, does this imply that the water has a common origin?" Marc Chaussidon of the Centre de Recherches Petrographiques et Geochimiques in Vandoeuvre-les-Nancy, France, asked in a commentary in Nature.

"We will pressure NASA for more samples," Saal said.