The group says it is fighting for a fairer distribution of wealth in the region, where five decades of oil extraction by foreign firms have polluted land and water, leaving villagers impoverished. 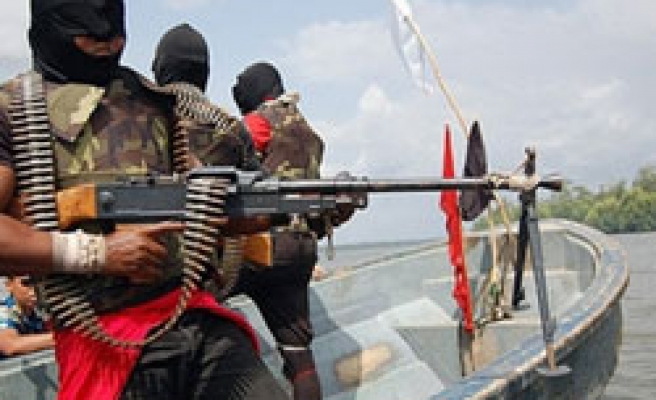 Nigerian militants responsible for the bombing of oil pipelines and the kidnapping of foreign workers in the Niger Delta said on Tuesday they would not take part in a peace summit called by the government.

The Movement for the Emancipation of the Niger Delta (MEND), whose campaign of violent sabotage against Nigeria's oil industry has helped push world oil prices to record highs, said next month's summit was "bound to fail".

"MEND has made its position very clear that it will not be a part of the jamboree called a summit. Unlike other groups that go back and forth to be appeased with bribes, MEND has people with integrity," the group said in an e-mail to Reuters.

The violence in the creeks of the Niger Delta, whose oil output makes Nigeria the world's eighth biggest exporter, have cut the country's production by a fifth since early 2006.

The group says it is fighting for a fairer distribution of wealth in the region, where five decades of oil extraction by foreign firms have polluted land and water, leaving villagers impoverished while corrupt local politicians and criminal gangs enrich themselves with a lucrative trade in stolen crude.

President Umaru Yar'Adua's one-year old administration has repeatedly promised to address the underlying causes of the unrest, but also warned it will not tolerate the presence of armed militants and criminal gangs in the delta.

"As long as there are militant camps in the creeks and as long as there is a cartel that is carrying out bunkering of crude petroleum in the Niger Delta, you can never reach peace," Yar'Adua said in a televised interview last month.

He said on Friday that the long-awaited summit would take place in July. Vice President Goodluck Jonathan, a native of the delta, has been tasked with organising the meeting.

Jonathan's office said on Thursday that top U.N. official Ibrahim Gambari, a Nigerian who is a special adviser to U.N. Secretary General Ban Ki-moon, would lead a steering committee to prepare the summit.

Gambari was Nigeria's envoy to the United Nations in 1995 when writer Ken Saro-Wiwa and eight other activists were hanged by the then-military government of General Sani Abacha after leading protests against international oil companies.

MEND rejected Gambari's involvement in the proposed summit, saying he had defended Abacha's actions against international condemnation at the time of Saro-Wiwa's execution.

"Ibrahim Gambari's utterances during the trial and after the murder of Ken Saro-Wiwa have come back to haunt him," MEND said.

"Here is a man who defended the despot, Sani Abacha, and the judicial murder only to expect a warm embrace from the Niger Delta people. He is not welcome and we do not consider him credible," the e-mail said.

MEND also repeated that militant leader Henry Okah -- on trial in the central city of Jos for treason and gun-running, and facing the death penalty if convicted -- must be released so he could take part in any peace process.