Northern Ireland entered a new era Tuesday as former Protestant and Catholic arch-foes were sworn in to share power and restore self-rule in the long-troubled province. 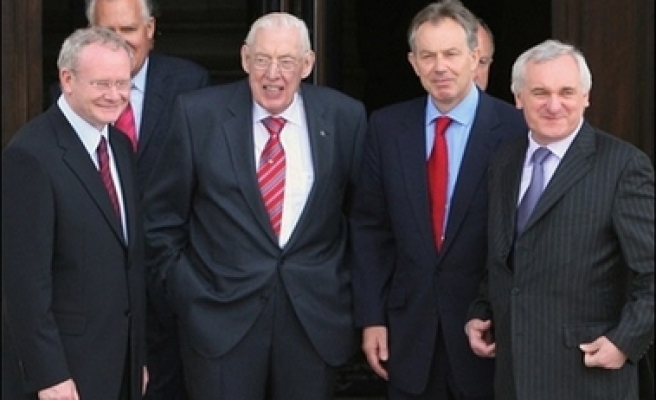 Northern Ireland entered a new era Tuesday as former Protestant and Catholic arch-foes were sworn in to share power and restore self-rule in the long-troubled province.

"Northern Ireland has come to a time of peace. A time when hate will no longer rule," said the clergyman of the Democratic Unionists (DUP). "How good it will be to be part of a wonderful healing in this province."

Sinn Fein, backed by the militant Irish Republican Army (IRA), has for decades pressed for Northern Ireland to be re-united with the Irish Republic, while unionists insist the province remain a part of the United Kingdom.

The violence largely ended after the 1998 Good Friday peace deal, but efforts for a permanent settlement stalled when power-sharing was suspended in October 2002 over charges that the Catholic nationalists were spying.

Those efforts were revived by Blair and Ahern last November in the Scottish town of Saint Andrews, where a deal was brokered to restart power-sharing in March.

The real breakthrough came on March 26, when Paisley and Sinn Fein leader Gerry Adams finally agreed to share power, albeit with a six-week delay, taking them to Tuesday's historic inauguration.

While all was smiles inside the Northern Ireland assembly, three protestors were arrested and three police officers injured in scuffles outside, apparently protesting Blair's presence and the war in Iraq.