The negotiators are seeking to push forward a disarmament deal that saw Pyongyang freeze and begin disabling its Yongbyon nuclear plant. 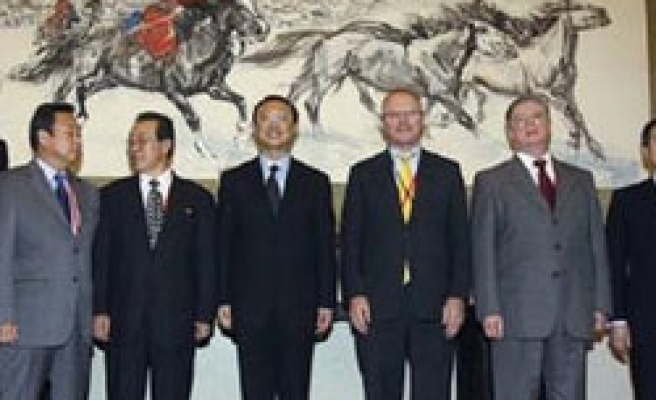 North Korea pledged on Saturday to complete steps to disable its nuclear facilities by the end of October, at six-country talks aimed at disarming the communist state in return for aid and better diplomatic relations.

International envoys could not agree on a guideline to verify the North's account of its own nuclear activities made last month but mandated a working group to draw up a detailed protocol on the facilities to visit for inspections and who will take part.

"The protocol gets very complex, but it's not just saying what verifiers will have a right to do -- that is, to visit sites -- but it also spells out what they can when they visit the sites," chief U.S. envoy Christopher Hill told reporters.

The impoverished North will get all 1 million tonnes of heavy fuel oil by the same date as promised under a disarmament deal with South Korea, the United States, Japan, Russia and China, a joint statement issued at the end of three days of talks said.

The talks by six countries aimed at coaxing North Korea to abandon its nuclear weapons programme are the first in nine months and come after Pyongyang produced last month an inventory of nuclear activities, one of the steps pledged under the deal.

The United States was seeking a standard package of measures to verify North Korea's own account of its nuclear programme, its envoy said earlier on Saturday as negotiators try to move ahead on disarming the communist state.

"We want basically standard kinds of package of how you verify this type of nuclear programme," Assistant U.S. Secretary of State Hill told reporters. "We're not asking for anything unusual."

South Korean officials said while there was progress at talks on providing energy aid to the impoverished state in return for steps to eventually dismantle its nuclear programme, differences remained between the North and the rest on how to verify the North's declaration.

The negotiators are seeking to push forward a disarmament deal that saw Pyongyang freeze and begin disabling its Yongbyon nuclear plant.

In exchange for those steps and for handing over last month the declaration originally due at the end of 2007, North Korea has been receiving much-needed energy aid and was also promised improved diplomatic relations with the United States and Japan.