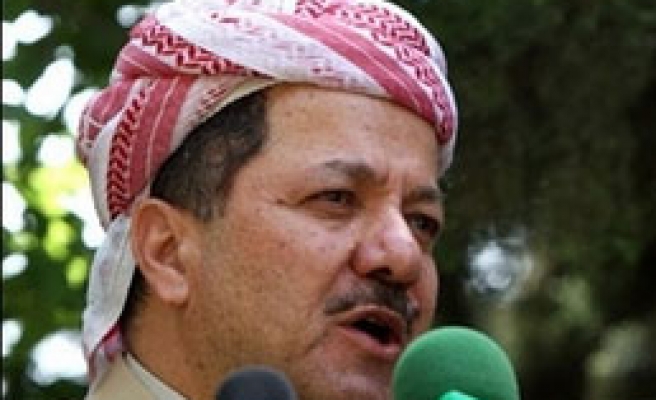 A recent meeting with senior Turkish officials has removed a "psychological barrier" in relations between Turkey and the Iraqi Kurds, Iraqi Kurdish leader Massoud Barzani has said, in his first remarks directly concerning the landmark meeting on May 1.

Barzani was speaking in the resort town of Salahaddin in Arbil, where he gathered on Tuesday with executives from the branch offices of his Kurdistan Democratic Party (KDP) from Dohuk province.

"We expect other positive steps to be taken, too. Relations with Turkey are getting better. Cold winds blowing between the two sides disappeared after the last meeting. The meeting was useful," he stated. Ankara for many years has refused to have any dialogue with the Iraqi Kurds, saying they support the outlawed Kurdistan Workers' Party (PKK), but the path for dialogue is now slowly reopening. Turkey has also been striking PKK bases in Kurdish-run northern Iraq since Dec. 16 and the United States, which recognizes the PKK as a terrorist group, has backed the operations by providing intelligence and airspace clearance for Turkish warplanes.

On Sunday, Massoud Barzani was quoted as saying that the PKK must end the violence and that Kurds want dialogue with Ankara. Earlier this week, news reports said the Iraqi Kurdish administration had established security outposts on the border with Turkey to prevent infiltration of PKK members into Turkey.

"We want to have strong relations with neighboring countries. However, sometimes this was victimized by internal disputes of these countries. The Kurdish issue can't be resolved with war. The solution comes through dialogue and political and peaceful means. Turkey's military operation in February into the Kurdistan region was not nice. I am thankful to the region's people, who displayed a generous manner during the operation. We are ready to help all parties if the goal is a political solution," Barzani also told his party executives. In Ankara on Tuesday, Erdoğan said the government would continue its dialogue with all ethnic groups in Iraq, including Kurds, in addition to the central government.

"Our dialogue with both the central government and all groups will continue. We've been handling seriously the issue of counterterrorism with its political, economic and diplomatic dimensions in addition to its security dimensions," Erdoğan said, while speaking at a parliamentary group meeting of his ruling Justice and Development Party (AK Party). "Iraq and Turkey have to act with an understanding of mutual respect and confidence for overcoming problems in regards to themselves and in regards to the region," he added.

Meanwhile, the prime minister also said that Turkey will spend YTL 2.3 billion ($1.83 billion) this year to develop the impoverished and restive southeastern region, including building dams and irrigation networks.

The investment is part of a five-year plan to spend billions of lira in the mainly Kurdish Southeast as part of efforts to drain support from PKK, which is listed as a terrorist organization by a large majority of the international community.

The European Union, which Turkey aims to join, has urged Ankara to boost the language and cultural rights of its Kurdish citizens and to do more to develop the economy of the Southeast, long hamstrung by the PKK conflict.

Democratic Society Party (DTP) parliamentary group chairman Ahmet Türk said yesterday in the northern Iraqi city of Sulaimaniya that a DTP delegation's visit to the region should not be misinterpreted as pursuing "financial or political sponsorship" for their party. Türk was speaking to reporters ahead of their meeting with Iraq's President Jalal Talabani, CNN-Türk reported. The delegation, comprising Türk and DTP deputies Hasip Kaplan, Sebahat Tuncel and Nuri Yaman and as well as Kamuran Yüksek, the deputy co-chairman of the DTP, arrived in Sulaimaniya on Tuesday night.

"Our meetings with Iraqi Kurdish authorities should by no means be considered as pursuing financial or political sponsorship for the DTP. We favor a solution of Turkey's problems in Turkey. However, we would like to share the DTP's view with everyone in the international arena," Türk was quoted as saying by CNN-Türk. "The delegation will explain to President Talabani that Turkey's military operations inside northern Iraq are not helpful for the eventual solution of the Kurdish issue. During talks with both Talabani and the Iraqi Kurdish leadership, the DTP will ask them to play their role in finding a solution to the Kurdish issue, and they will also emphasize the vital need for unity among Kurdish people," a DTP executive told Today's Zaman ahead of the visit.