North Korea toppled the cooling tower at its plutonium-producing reactor on Friday in a symbolic move to show its commitment to a nuclear deal that comes a day after it submitted an inventory of its atomic programme. 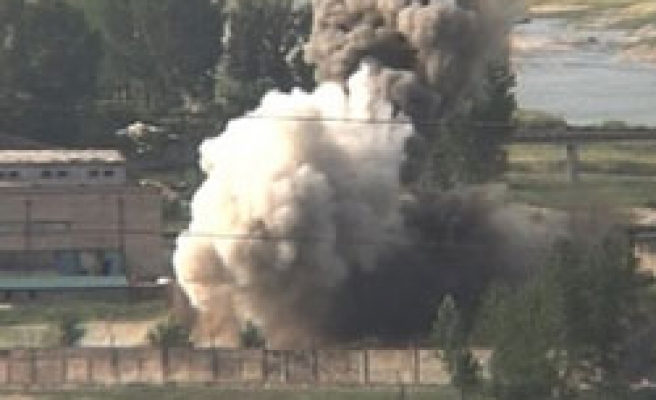 Responding to the unusual opening by Pyongyang, the United States has moved towards taking the North off its so-called "list of state sponsors of terrorism" and issued a proclamation lifting some sanctions under the Trading with the Enemy Act.

Video footage showed the some 20-metre (65-ft)-high tower being brought down with a blast at its base that sent plumes of smoke into the air and left a crater of rubble and twisted steel.

In its first reaction since making the declaration, North Korea welcomed the U.S. moves to drop it from the blacklist and called on Washington to halt its hostile policy toward it.

"Only then can the denuclearisation process make smooth progress along its orbit," the official KCNA quoted a foreign ministry spokesman as saying.

"This was an active reactor. This was a reactor that was making plutonium, that made enough plutonium for several devices including one that was tested in 2006 so it was important to put North Korea out of the plutonium business," said U.S. Secretary of State Condoleezza Rice.

Lee Chung-min, a professor of international relations at Yonsei University in Seoul, said: "The key issue here is of course verification and what type of an inspection regime the North Koreans agree to.

"Once we come down to the nitty-gritty of inspections, they will basically try to prolong the process as long as possible, without giving up nuclear weapons."

U.S. President George W. Bush on Thursday cautiously welcomed the declaration but warned North Korea, which tested a nuclear device in October 2006, that it faced "consequences" if it did not fully disclose its operations and continue to dismantle its nuclear programmes.

Once it is removed from the terrorism list, North Korea will be able to better tap into international finance.

Due to the small size of North Korea's rickety economy, any increases in investment and trade could have major effects, experts said, adding that increased revenue would likely make its way to Pyongyang's leaders and further solidify their rule.

"It will basically secure their legitimacy and their survivability," said Carl Baker, director of programmes at the Pacific Forum CSIS think tank in Hawaii.

Christopher Hill, the chief U.S. envoy to the six-way talks, said in Japan on Friday that all the parties had received a copy of the declaration and would now move to verify its contents.

South Korean broadcaster YTN cited an unnamed, senior South Korean source as saying that the six-country talks could resume as early as next week.

Foreign ministers from the Group of Eight leading nations meeting in Kyoto said it was important to speed up the six-way talks and called on the North to take prompt action to answer Japan's concerns about its nationals kidnapped decades ago by North Korean agents.

Under a deal North Korea struck with China, Japan, Russia, South Korea and the United States, Pyongyang was required to start taking apart its ageing Yongbyon nuclear plant and provide the nuclear list by the end of 2007.

U.S. and South Korean officials said the North has taken most of the steps to put the Yongbyon facility -- which includes the reactor, a plant to make nuclear fuel and another to turn spent fuel into plutonium -- out of business for at least a year.

Yongbyon is suspected of having problems with safety and radiation contamination. Visitors to the site located about 100 km (60 miles) north of Pyongyang wear protective clothing and are subject to frequent radiation checks.

One source familiar with the plant said it would take years to clean up the contamination but would not speculate if there was any danger from bringing down the cooling tower.

Jon Wolfsthal, in a paper for CSIS, said after a visit last year to Yongbyon that: "The site is frozen in the 1950s and more closely resembles a junk yard than an evil regime's nuclear nerve centre."