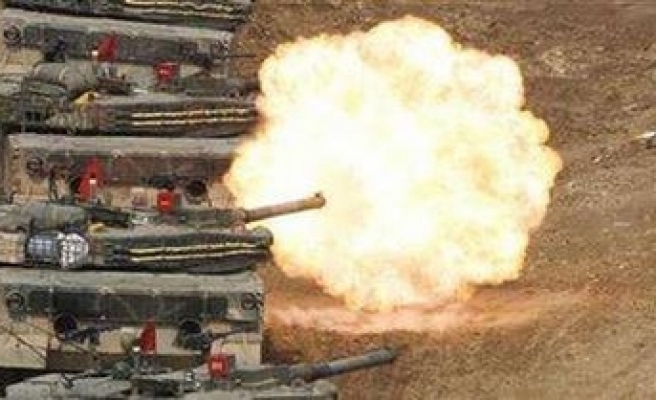 North Korea's military denounced annual U.S.-South Korean military exercises beginning on Sunday, saying it was a sign Washington was not about to give up its hostile policy, and vowed to strike back.

The exercises take place days after an unprecedented concert of the New York Philharmonic in Pyongyang aimed at warming ties between foes of more than 60 years.

"All facts clearly prove once again that the U.S. does not have any idea of dropping its hostile policy toward the DPRK at all," the North's Korean People's Army said in a statement carried by official KCNA news agency.

"If the U.S. and South Korean bellicose forces persistently work to realise their scenario to stifle the DPRK by force of arms at any cost, the KPA will not stand passively on the defensive but counter it with positive retaliatory strikes by mobilizing all means long built up by the DPRK at a high price."

The United States has brought an aircraft carrier to South Korea for the training exercises called Key Resolve and Foal Eagle.

The drills start on Sunday and end on March 7.

The United States has about 27,000 troops in the South to support the country's 670,000-strong military. North Korea is one of the world's most militarised states with an army of 1.2 million, most of whom are stationed near the border.

The North's military statement also suggested it might be having fresh reservations about a six-country deal to end its nuclear programmes in return for aid and better diplomatic standing, which had become bogged down over the North's refusal to make a full disclosure of its programmes by end of last year.

"The KPA has never expected any benefit from the dialogue with the U.S.," the statement said. "(The exercise) is an open and blatant challenge to the denuclearisation and peace of the Korean Peninsula."

The North's top nuclear envoy failed to show up in Beijing at the weekend, prompting the top U.S. negotiator to say the North was "not ready" for talks to push ahead with nuclear disarmament.